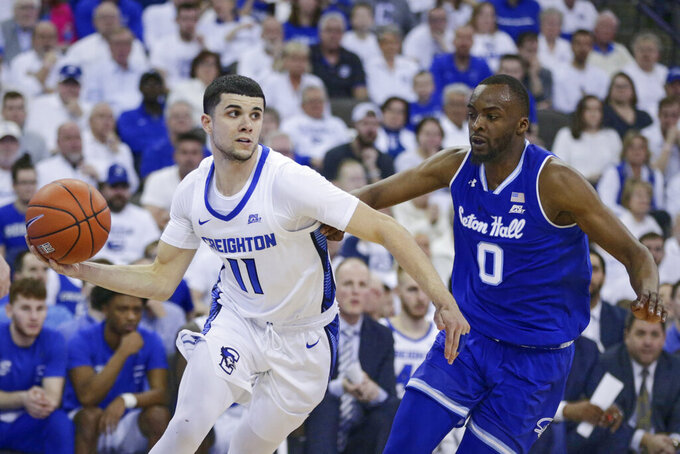 OMAHA, Neb. (AP) — Marcus Zegarowski is doubtful for No. 7 Creighton's first game in the Big East Tournament because of a right knee injury.

The school announced Monday night that the sophomore guard has a meniscus injury. The Bluejays' next game is Thursday against Georgetown or St. John's.

Zegarowski got hurt during Saturday's 77-60 victory over Seton Hall and left the arena on crutches. He didn't have crutches while attending practice Monday, but he walked with a noticeable limp.

Creighton (24-7) is the top seed in the conference tournament after finishing in a three-way tie for first place in the regular season.

Zegarowski scored 23 points and made all five of his 3-point attempts in the victory over the Pirates.

He has started 30 of 31 games and is second on the team in scoring at 16.1 points per game. He's third in the Big East in 3-point shooting at 42.4%. He was named to the All-Big East second team on Sunday.

“Any time you take someone that has his fingerprints all over your team both on offense and defense and off the floor, it has an impact," coach Greg McDermott said. "We haven't played a lot with him or Mitch (Ballock) or Ty-Shon (Alexander) off the floor. If we have to play without him, obviously it's going to be an adjustment.”