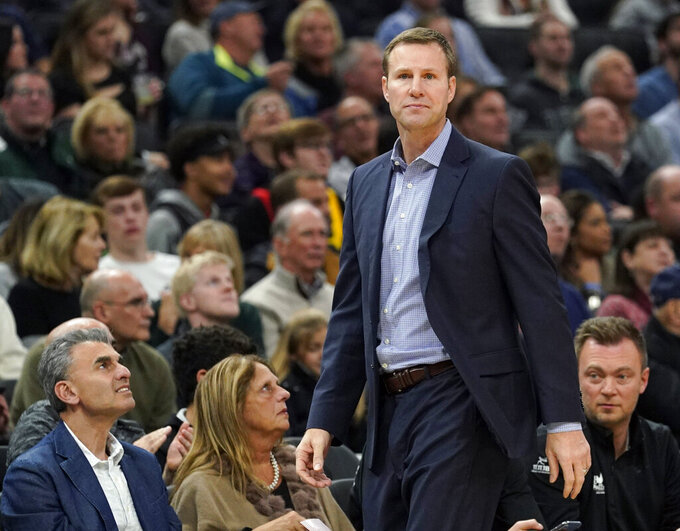 FILE - In this Friday, Nov. 16, 2018 file photo, Chicago Bulls head coach Fred Hoiberg watches during the first half of an NBA basketball game against the Milwaukee Bucks in Milwaukee. A person with knowledge of the negotiations has told The Associated Press that Nebraska has finalized a deal to hire Fred Hoiberg as its coach. The person spoke to the AP on condition of anonymity Saturday, March 30, 2019 because the school has not announced the hiring. (AP Photo/Morry Gash, File)

Fred Hoiberg, the former NBA player who coached Iowa State and the Chicago Bulls, was hired Saturday to coach a Nebraska team that had big hopes this season but finished with a 19-17 record and out of the NCAA Tournament yet again.

Hoiberg has strong ties to the school, which announced his hiring four days after seventh-year coach Tim Miles was fired.

Hoiberg, dismissed by the Bulls in in December, agreed to a seven-year contract paying a total of $25 million.

"I can't express how excited I am to be back on the sidelines and to be coaching at a university that means a lot to my family and me," Hoiberg said. "Nebraska has always felt like a second home."

Hoiberg went 115-155 from 2010-15 with the Bulls. Before that, he had a successful five-year run as Iowa State's coach with an up-tempo, spread-the-floor offense. He went 115-56 and led the Cyclones to four straight NCAA Tournaments and two Big 12 tournament titles.

"When you look at him, you see an individual who has had success as a player and a coach," athletic director Bill Moos said. "Fred's background will sell itself on the recruiting trail, and help us bring in the type of student-athletes needed to compete at the highest level. His style of play not only will be appealing to prospective recruits but will also provide our great fans an entertaining brand of basketball."

Hoiberg takes over a program that has never been able to win consistently. Nebraska's most recent regular-season conference championship came in 1950. The Huskers remain the only Power Five conference program to have never won an NCAA Tournament game.

As a star player for Iowa State, Hoiberg became known as "The Mayor" because of his popularity in Ames. He competed twice a year against the Huskers from 1991-95 — when Nebraska enjoyed its most sustained success, with four straight NCAA appearances. In the 25 years since, the Huskers have gone to the tournament just twice (1998, 2014).

Nebraska had reason to be encouraged this season. The Huskers started 13-4 and were in The Associated Press Top 25 for the first time since 2014. Then the Huskers lost 11 of the next 13 and finished 13th in the Big Ten, the fifth time in seven years they've been 10th or worse. A brief run in the Big Ten Tournament wasn't enough to earn an NCAA bid.

The Huskers will lose seniors James Palmer Jr., Glynn Watson Jr. and Isaac Copeland, and junior Isaiah Roby has said he didn't know if he would return if there were a coaching change.

Hoiberg had said shortly after his dismissal by the Bulls that he wanted to coach again, but the speculation was that it would be in the NBA.

The school built a new practice facility in 2011 and a new arena in 2013. With the infrastructure in place, Moos and the university administration were looking to make a splash hire.

"I had the opportunity to coach (an exhibition) at Pinnacle Bank Arena with the Bulls, and I have seen first-hand that the facilities are as nice as any in the country," Hoiberg said. "When you couple that with a loyal and passionate fan base, you can see there is great potential for the future of Nebraska basketball."