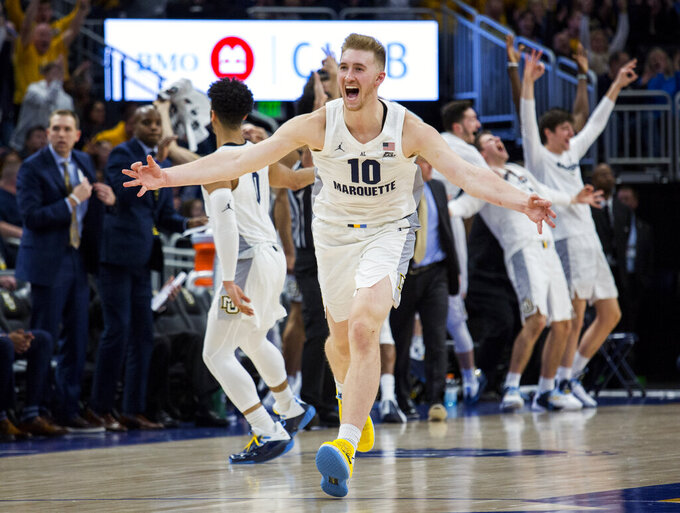 Marquette forward Sam Hauser reacts after making a three-point basket against Providence late in the second half of an NCAA college basketball game Sunday, Jan. 20, 2019, in Milwaukee. (AP Photo/Darren Hauck) 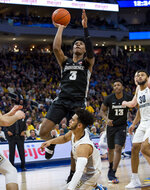 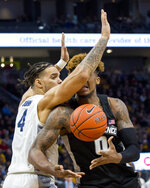 MILWAUKEE (AP) — Marquette head coach Steve Wojciechowski didn't like the first half. He felt much better about the second.

"We were very fortunate to be down only eight points at halftime," Wojciechowski said, adding that he didn't do a good enough job preparing the team.

"Give Providence credit. They outworked, out competed and out executed us in the first half by a large margin. We were very fortunate only to be down eight points."

Howard had a three-point play and capped a 13-5 run with a free throw that made it 38-all with 14:18 left. He gave Marquette its first lead since the opening bucket at 40-39 with a pair of free throws a minute later.

Hauser liked the team's ability to hang in there.

"In the first half we were kind of struggling," he said. "In the second half, a lot of guys stepped up."

After honoring former star Dwyane Wade with a celebration that included a halftime tribute, Marquette surged and improved to 13-0 at home.

Howard was a questionable starter earlier in the week after exiting Marquette's road win at Georgetown on Tuesday with lower back tightness. The Big East's leading scorer (24.4) logged just three minutes before he came out of that game.

Wojciechowski was concerned about Howard and Ed Marrow, who missed the Georgetown game with an ankle injury, playing without full practices.

"We were able to do enough that they would be able to play," Wojciechowski said. "This is a hard game not to have practice preparation."

The lead then changed seven times before Marquette's Sacar Anim hit a 3-pointer that began a 10-2 run. The Friars (11-7, 1-4) twice pulled within two points, but Hauser and brother Joey Hauser combined for 12 points to keep Marquette ahead.

Sam Hauser scored 20 points in the second half. He finished 8 of 13 from the floor and 4 of 7 from beyond the arc. His brother, Joey, a freshman forward, added 11 points, including a 3 and a three-point play down the stretch.

Nate Watson tied his career-high with 21 points for Providence and Alpha Diallo had 16.

Providence came in having won three of the last four meetings, including the last two at the Bradley Center. This was their first matchup at the new Fiserv Forum.

Marquette is known for its defense at home, but Providence turned up the pressure.

The Friars hounded and slapped at each Golden Eagles' possession, allowing just seven baskets on 25 attempts (28 percent), including 5 of 14 from 3-point range. Howard had 10 points and Sam Hauser had five, but no other Marquette starter scored in the first half.

Providence: The Friars outscored Marquette 18-4 in the paint and 10-0 on second-chance points in the first half.

Providence outrebounded Marquette 43-31 owned the paint, 40-22 and had 18 second chances to the Golden Eagles 2.

Marquette celebrated the Hall of Famer in the marking the career of Wade, a former Marquette star (2000-2003). The 12-time NBA All-Star and three-time champion watched from courtside as video tributes were shown during breaks.

Providence: Plays at Xavier on Wednesday.