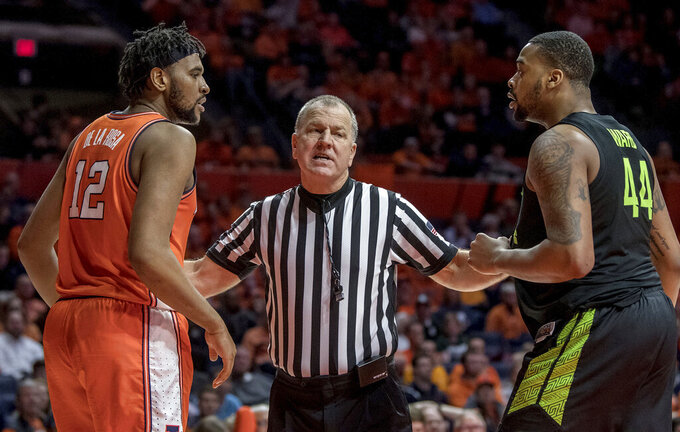 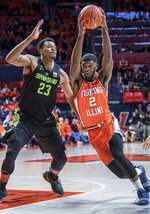 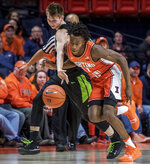 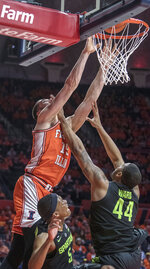 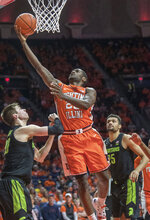 "Michigan State is a great team, and Tom is a great coach," Underwood said. "They're everything I want to be."

Ayo Dosunmu scored 24 points, and the Illini used its swarming defense to shock the Spartans. Illinois forced 24 turnovers by Michigan State, including 17 in the first half.

Fans stormed the court after the Illini dribbled out the final 9 seconds of the game.

"I mean, it's just one of 20 (Big Ten games), I know," Underwood said. "But man, it's also more than that, you know? It feels like one of those defining moments, I think, where we found out who we are."

"I think that first half was as good a defensive effort as I have ever coached," Underwood said. "It led to some really good offense for us."

Izzo was steamed enough after the loss that he credited his team with four more turnovers than it actually committed.

"Illinois played hard. I'll give them credit for half of the turnovers," Michigan State coach Tom Izzo said. "But we had, what, 28 turnovers? Something like that. I mean, that's completely ridiculous and that's all on us."

Illinois led for all but a three-minute stretch late in the game, pushing ahead by as many as 14 points before Michigan State rallied to take a 64-63 lead on Kenny Goins' 3-pointer with 6:21 remaining.

But Illinois, behind its defense, held on and took a 71-68 lead on Dosunmu's 3-pointer with 2:35 left. Dosunmu made another 3 with 1:57 remaining, and the Illini held on from there as the Spartans missed their last four field-goal attempts.

"We knew they are one of the top teams in the country," Dosunmu said. "So we knew they would make a run at us. I just focused and took my shots, and then just kept on going."

"I'm still in shock," Bezhanishvili said. "It was just unbelievable the way the crowd swarmed the court. I have never been a part of anything like that in my life."

The Spartans were fortunate to stay in the Top 10 after dropping two straight. With Monday's loss, they are likely to fall precipitously.

Michigan State: The Spartans dropped a half-game behind Michigan and Purdue in the Big Ten. The conference schedule has exposed Michigan State's shortcomings without Joshua Langford, who is out for the season with a foot injury. The junior guard had been the main driver of the Spartans' offense.

Illinois: The Illini are on an upswing, having won three of four as their defense has frustrated opponents.