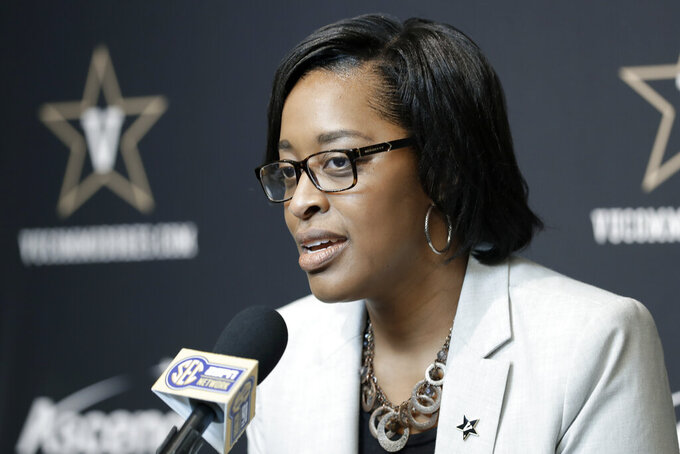 NASHVILLE, Tenn. (AP) — Candice Storey Lee won't talk about how long she might be in charge of Vanderbilt's athletic department, having already made history as the first black woman to hold that job in the Southeastern Conference.

However long this role lasts, Lee is very aware of how much this means.

“It's not lost on me the responsibility that I have that people who, both those who look like me and those who don't, know that they can have opportunities to excel really in any space that they want,” Lee said Wednesday night before Vanderbilt hosted No. 18 LSU in men's basketball."

Vanderbilt named the former basketball player who has spent her professional career with the Commodores as their first female athletic director Tuesday when the university announced it had accepted Malcolm Turner's resignation after a year on the job. Lee said she's been busy for the past 24 hours keeping her head down and working with Vanderbilt's coaches and staff, not thinking much on what this means overall.

“I understand the responsibility that this is, and I think that the most important thing is we have to get to the point where there are others,” Lee said. “Carla Williams was the first African-American woman to lead a Power Five institution. And we need a second and and a third and a fourth, and then we will know we're truly making a difference.”

Lee not only played basketball at Vanderbilt, she was a captain before graduating in 2000. She earned a master's degree in counseling from Vanderbilt in 2002 and got her doctorate in higher education administration in 2012.

Interim chancellor and provost Susan R. Wente did not mention how long Lee might be interim athletic director. Daniel Diermeier takes over as chancellor July 1, and Lee said that's a conversation for another time even as she knows that's what everyone wants to know. Football coach Derek Mason and former men's basketball star Shan Foster attended Lee's news conference, and her arrival was met with applause.

Vanderbilt has been working on a strategic plan for athletics since April, and Lee said that will be announced “very soon.” What the Commodores might do with a football stadium that was last renovated in 1981 has been a topic of speculation for years, especially after Turner took over. Asked about that plan, Lee said that will only be the first step.

“It's going highlight priorities for the next four to five years, and we'll make decisions based on those priorities,” Lee said. “That would be a first step. It's not an end-all, be-all. It's a first step, and that's coming very soon.”