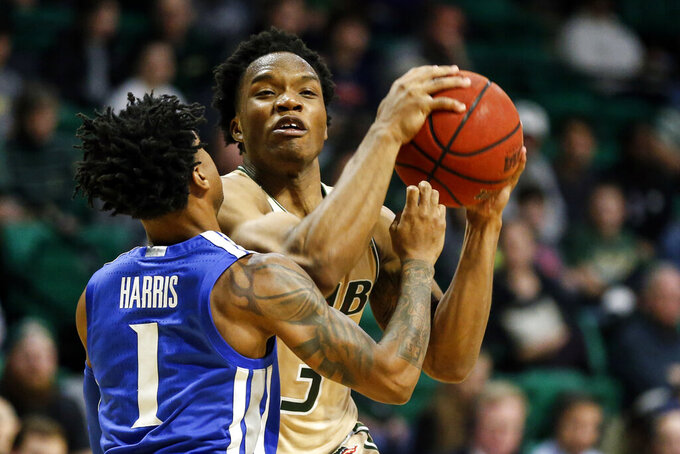 UAB guard Tavin Lovan (3) drives to the basket as Memphis guard Tyler Harris (1) defends during the second half of an NCAA college basketball game Saturday, Dec. 7, 2019, in Birmingham, Ala. (AP Photo/Butch Dill)

BIRMINGHAM, Ala. (AP) — Trailing by 20 during a dreadful start, coach Penny Hardaway and No. 15 Memphis kept their cool even as they staggered toward halftime.

In the locker room during the break, Hardaway turned up the intensity — and that finally got the Tigers on track.

“It wasn’t a pleasant conversation at halftime,” he said, “but they responded.”

Precious Achiuwa scored eight of his 14 points in the final 4 minutes, and Memphis rallied from a big deficit to beat upset-minded UAB 65-57 Saturday.

Memphis cranked up the pressure in the second half, and UAB finally cracked in the final minutes. The Tigers forced 23 turnovers overall, most with full-court pressure, showing a resiliency that didn’t surprise Hardaway.

UAB began unraveling after Achiuwa hit two free throws to reduce the deficit to 44-29. D.J. Jeffries, another member of Memphis’ heralded freshman class, followed up with two drunks and finished a one-man, nine-point run with a 3-pointer. That cut the lead to 44-38.

It took another 10 minutes, part of a 27-8 closing run, before Achiuwa's go-ahead tip-in.

“I think the tide turned on D.J.’s stretch,” Hardaway said. “When he got hot — that dunk he caught off the rim, then he hit a couple of jumpers, and we took charges — that’s who we are.”

Memphis: The Tigers busted out of a first-half slump in a big way, shooting 54% from the floor in the second half. ... Memphis improved to 5-0 without its leading scorer, freshman James Wiseman (19.7 points in three games). He is scheduled to return from suspension Jan. 12 after being banned by the NCAA after it was found that coach Penny Hardaway provided money for moving expenses to Wiseman's family before Hardaway was hired by Memphis.

UAB: The Blazers were doomed by 23 turnovers, a number of key ones in the second half due to Memphis’ full-court press.

Memphis: The Tigers take a week off before returning to action Dec. 14 at Tennessee in the penultimate game scheduled in the series. Tennessee coach Rick Barnes said recently he’s not in favor of renewing the contract following a contentious meeting last season in Memphis.

UAB: Also takes a week off before playing the first of three consecutive games with instate foes. The Blazers host Montevallo on Dec. 14.