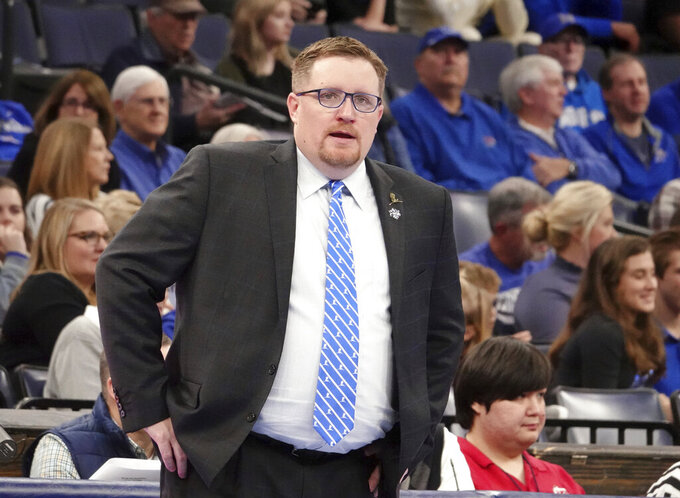 Quinones, who missed five game with the injury, returned Saturday scoring 13 points while converting all three of his 3-point attempts as No. 9 Memphis built a first-half lead and easily defeated New Orleans 97-55.

“There’s definitely a mental aspect to it,” Quinones said of the 3-point shooting. “My first five games, I think I was shooting 24% from 3. I don’t feel like that was me being myself, but I’m starting to get more comfortable, getting the groove back.”

Precious Achiuwa led Memphis (11-1) with 18 points and 10 rebounds as the Tigers extended their winning streak to nine. Tyler Harris finished with 11 points, while DJ Jeffries and Isaiah Maurice added 10 points each.

Troy Green led the Privateers with 22 points while Bryson Robinson added 15 as New Orleans (4-8) lost its third straight. Robinson and Green, the Privateers leading scorers, were a combined 8 of 21 from the field.

“We needed to control tempo,” New Orleans coach Mark Slessinger said. “They’re so good in transition. They’re so good at attacking the offensive glass and they shot the 3 so well. When they got off to a hot start shooting the 3, it really put us behind the eight ball.”

Memphis converted nine of its first 10 shots including its first five 3-pointers. That helped the Tigers build a 27-point halftime lead. From there, Memphis would coast he rest of the way. Memphis coach Penny Hardaway was pleased with his defense, a place where the Tigers have excelled recently. In addition to the Privateers low shooting percentage, Memphis also forced 28 New Orleans turnovers.

“We came out the way we were supposed to, turning them over,” Hardaway said of the start, later adding: “We’re playing defense incredibly. Really good defense, half-court defense, holding teams to very low percentages.”

While Memphis was able to shoot 52% for the game, including 12 of 23 from outside the arc, the downside was 27 Tiger turnovers after committing 28 in its last game against Jackson State. Hardaway acknowledged that as a shortcoming that needs improvement, but said by causing New Orleans turnovers and scoring off them, he liked his team’s play better than before the Christmas break.

“If we just cut that down, that’s when we’re just going to start to demolish teams,” Quinones said.

New Orleans: The Privateers suffered poor shooting in the first half, connecting on 25% overall and only 2 of 10 from outside the arc. New Orleans saw the game get completely out of hand midway through the first half as Memphis continued extending the lead.

Memphis: The Tigers took control early pushing the lead to double-digits. The advantage resulted in a 51-24 halftime lead, allowing Memphis fans to switch their attention to the football team playing in the Cotton Bowl.

Memphis moved into the Top 10 this past week and should easily hold that spot with New Orleans being the only game the Tigers have played since those rankings were released.

Hardaway noted Quinones’ shooting accuracy after the freshman guard sat out five weeks with the broken right hand. “Lester, for his first game back after a month, was incredible,” the Memphis coach said. “His energy. Three-for-3 from 3. I’ll probably just sit him out for (another) month, if he comes out shooting like that.”