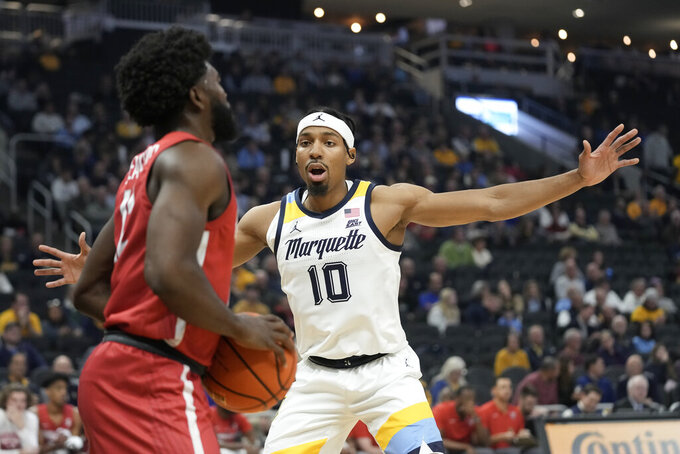 Marquette's Zach Wrightsil defends during the first half of an NCAA college basketball game against Radford Monday, Nov. 7, 2022, in Milwaukee. They already overcame the ravages of a hurricane to win a national title at their old school. Now former Loyola-New Orleans teammates Zach Wrightsil, Myles Burns and Brandon Davis are aiming for one more improbable achievement as they attempt to make the leap from their NAIA (National Association of Intercollegiate Athletics) program and succeed at the NCAA Division I level(AP Photo/Morry Gash)

MILWAUKEE (AP) — They overcame the ravages of a hurricane to win a national title at their old school.

Now former Loyola New Orleans teammates Zach Wrightsil, Myles Burns and Brandon Davis are aiming for one more improbable achievement as they attempt to make the leap from their NAIA (National Association of Intercollegiate Athletics) program and succeed at the NCAA Division I level.

Burns is at Mississippi, Davis at Texas State and Wrightsil at Marquette.

“I’ve always known I could play at this level,” said Wrightsil, a 6-foot-7 forward. “That was never a question in my head.”

The NAIA doesn’t keep track of how many players transfer from one of its schools to the NCAA Division I level. But the moves Burns and Wrightsil are making seem particularly rare as they go straight to one of the six major conferences.

None of the Atlantic Coast Conference, Big 12, Big Ten, Big East, SEC and Pac-12 schools that responded to an Associated Press survey could recall an example of their school adding a player directly from the NAIA.

“I personally believe that I’m more than capable of playing on this level,” said Burns, a 6-7 forward.

Stacy Hollowell, who coached Loyola to the NAIA championship, says there is talent at that level. He cites as an example EJ Onu, who was at NAIA program Shawnee State from 2017-21 and now plays for the NBA G League’s Memphis Hustle.

He remembers how Davis’ arrival last season gave Loyola what it needed to win a national title after falling short a year earlier. He believes Burns and Wrightsil both have the athleticism to thrive in a high-major program.

“What people don’t understand is they have a high-major will to win,” said Hollowell, who now works as Ole Miss’ associate athletic director for men’s basketball. “You can’t really quantify that by watching a guy. You’ve got to kind of be around him and feel that out, I think.”

Hollowell was around those guys enough to understand what they went through last year.

When Hurricane Ida hit New Orleans in August 2021, the storm ripped off a corner of the roof of the Loyola building that housed the basketball court.

Loyola practiced in Dallas for a couple of weeks while much of New Orleans was without power. After the players returned to campus, Loyola played home games at other local colleges. The players would practice whenever there was an open time slot, sometimes as early as 5 a.m.

A local convention center donated a court to Loyola that it used on campus as a temporary floor for some home games starting in January.

“We basically lost everything, so that brought us together,” Davis said. “When we played other teams, we had a common goal – not to let the stuff we’d been through hinder us from winning games.

They went 37-1 and won the school’s first national championship since 1945. Earlier in the season, Wrightsil scored 26 points, Burns 18 and Davis 11 in an exhibition victory over NCAA Division I program New Orleans.

Wrightsil was named the NAIA player of the year. Burns was a second-team NAIA All-America selection and Davis earned honorable mention. Burns also won the Marques Haynes Award for having the most steals of any player in any level of college basketball.

Their success led to NCAA Division I offers. They couldn’t pass up the opportunity.

“I’ve definitely had dreams of playing at a big Division I school,” Burns said. “Every basketball player I think wants that.”

Now they’re adjusting to the jump in competition.

Burns noted that most NAIA programs don’t have the athletic big men he will face in just about every SEC game. All three former Loyola players talked about dealing with additional time demands.

Wrightsil had to play catch-up after having arthroscopic knee surgery in June. He played just six minutes and scored two points Monday in Marquette’s season-opening 79-69 victory over Radford.

“I would definitely advise anyone following our team to watch how much better Zach is in November than he was in October and how much better he is in December than November and so on,” Marquette coach Shaka Smart said. “He’s going to keep getting better as he gets accustomed to this level.”

Burns and Davis were both in the starting lineups Monday for their new teams. Burns had nine points and six rebounds in 30 minutes as Ole Miss defeated Alcorn State 73-58. Davis, a 6-1 guard, played 25 minutes and had two points and five rebounds in Texas State’s 83-61 loss at Washington State.

The three former teammates are sharing advice on how they can succeed at their new schools.

“They’re going through their bumps and bruises just like I am,” Wrightsil said. “It’s been a really fun ride just being able to talk with them about it because we’re all in the same boat, coming from that level to an all-new level.”