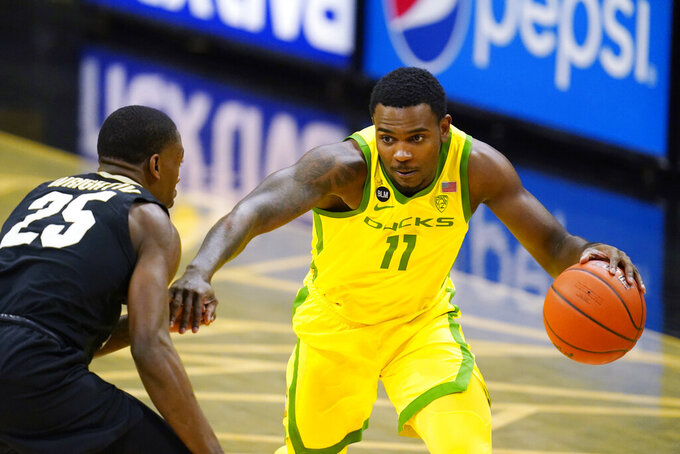 BOULDER, Colo. (AP) — McKinley Wright IV wound up with a knot on the back of his neck from sliding into a courtside chair.

All the crash did was ignite him.

Wright recovered from the scary fall to score 21 points, including a game-sealing scoop layup with 27 seconds left, and Colorado held off No. 17 Oregon for a 79-72 win on Thursday.

“Big-time win for us,” Wright said.

The senior point guard was fouled driving to the basket late in the first half, slid out of bounds and banged his neck on a seat along the baseline. He pounded the floor in pain before joining the team on the bench and returning to the floor to shoot free throws. Struggling before the fall, Wright caught fire after it — scoring all of his points.

“It was a tough start for me," Wright said. "I tried to stay aggressive. My teammates kept believing in me.”

Wright had five assists to move five away from breaking the school record of 562 assists held by Jay Humphries (1980-84). Wright also grabbed a season-high 10 rebounds.

“I’m in awe of him on the court,” said Colorado big man Evan Battey, who had 12 points and 10 rebounds but also picked up a technical for his emotions after an offensive foul call. “I’m in awe but I’m in the play as it’s being ran. So it’s kind of special to watch and to be in awe, while you’re in the action.”

“We’re in this together and we all have our share of blame,” Oregon coach Dana Altman said. “Ball movement was really poor. We had some bad turnovers."

The Buffaloes led 71-61 with 2:26 remaining when Oregon made a late surge. The Ducks trimmed it to four on Duarte's 3-pointer with under 2 minutes left. But Eli Parquet drove to the hoop and Oregon was called for goaltending to restore some breathing room. Wright then sealed it with his layup.

Moments like that are precisely why he returned this season.

“I want to win,” said Wright, whose team was spurred by a 14-2 run to start the second half. “Coach put me in the position to win.”

Colorado coach Tad Boyle’s teams are renowned for knocking off ranked opponents. Under Boyle, the Buffs are 20-34 against teams appearing in the polls. That accounts for 31% of the program’s victories over ranked teams since 1949-50.

“It’s a testament to our players,” Boyle said. “We had the opportunities and we’ve taken advantage of it 20 times. The 34 I don’t like. But when you play a ranked team it’s hard to win. ... Colorado basketball, I don’t think gets enough national respect or recognition. The only way that’s going to happen is to win games like this, against teams like Oregon.”

Oregon: The Ducks had a plus-7.5 rebound margin this season. They were outrebounded by Colorado 40-28.

Colorado: Under Boyle, the Buffs have proven tough to beat at home. They're 144-27 at CU Events Center since he took over in 2010.

The Buffaloes finished 7 of 26 from 3-point range. They entered with the highest 3-point field goal percentage in the league.

Oregon: The Ducks’ game at Utah was moved up from Sunday to Saturday.

Colorado: The Buffaloes were scheduled to play Oregon State on Saturday, but it was postponed due to COVID-19 protocols within the Beavers program. Colorado faces Utah in Salt Lake City on Monday.