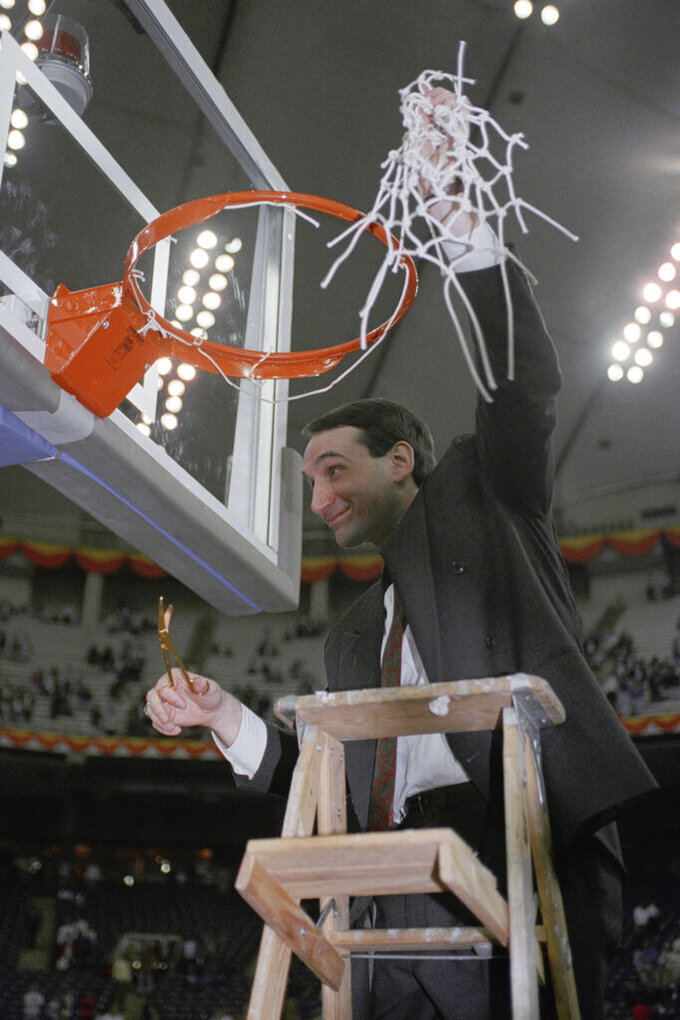 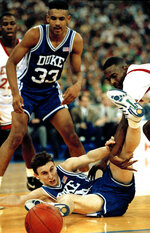 A panel of Associated Press sports writers voted in March 2020 on the top 10 men's basketball games in the history of the NCAA Tournament. They are being republished because the sport has been shut down because of the coronavirus pandemic. The following game was voted No. 5 and the following story was sent March 30, 1991.

INDIANAPOLIS (AP) — A second chance for Duke proved to be the last chance for UNLV.

Recouping from a 30-point loss in last year's NCAA championship game, the Blue Devils won a game they were given as much chance of winning as drawing an inside straight at the gaming tables.

They beat top-ranked UNLV 79-77 on Saturday to end the Runnin' Rebels dream of a repeat title, an undefeated season and basketball immortality.

Christian Laettner, the only Duke player who played well in the 103-73 loss last season, made two free throws with 12.7 seconds to play to give Duke its final margin.

UNLV came down court with one final chance at keeping its dreams alive, but Anderson Hunt's 3-pointer with 2 seconds to play bounced off the rim.

Hunt was hugged by his teammates. Duke players celebrated. And UCLA stayed the last school to repeat in 1973, and Indiana in 1976 remained the last unbeaten champion.

The Runnin' Rebels' 45 game winning streak — the fourth-longest in Division I history — was ended two games short of where they had hoped. Duke will play Kansas, a 79-73 winner over North Carolina, in Monday night's championship game.

“It was one of the really great basketball games,” Duke coach Mike Krzyzewski said. “Our kids hung in there the whole time, we just happened to play defense on the last exchange.”

The upset by the Blue Devils must have been especially sweet to two coaches — Krzyzewski, of course, and Indiana coach Bob Knight, his mentor and close friend who led the Hoosiers to that perfect championship record in 1976.

Duke had been no stranger to the Final Four, making its fourth consecutive appearance, fifth in six years, and ninth overall. The Blue Devils reached the title game four other times, never leaving with a trophy, and now they would get a chance to walk off the court with one on Monday night.

Laettner finished with 28 points and it was his yeoman work off the boards which allowed Duke to stay in the game and hold nine leads in the second half.

UNLV (34-1) trailed in the second half this season for a total of 1 minutes, 21 seconds. Now, it will trail forever.

Bobby Hurley, plagued with stomach problems in last year's game in a poor performance, hit a 3-pointer 15 seconds later to cut the lead to two.

The Runnin' Rebels were called for a 45-second shot-clock violation with 1:24 left and Duke's Brian Davis drove the baseline for a three-point play and a 77-76 Duke lead with 1:02 left.

The Hoosier Dome crowd was cheering as it hadn't expected to late in a UNLV game. This was usually blowout time for the Rebels. Not this time, though.

Stacey Augmon missed a shot for UNLV, but Larry Johnson was fouled trying to convert the rebound with 49 seconds left. He missed both free throws, but a lane violation on Duke's Thomas Hill gave him another chance at the second and he made it to tie the game.

Duke ran down the shot clock, settling for a drive by Hill with 15 seconds to play. The shot missed, but Laettner grabbed the rebound, was fouled and made both for the final points.

Win or lose in the title game, ending UNLV's winning streak will remove some of the sting of last year's rout for Krzyzewski and the returning Duke players.

“We did it by not listening to anyone but Coach K and the coaching staff,” Laettner said. “We went into the game thinking we could win and we went out on the floor and did it today. We had a good game plan, we played our game. And we just played really tough, really intense out there.”

UNLV coach Jerry Tarkanian said he hoped Johnson would get a chance at a winning 3-pointer in the final seconds. Johnson brought the ball upcourt, passed to Hunt and never got the ball back.

“They played better than we did, they deserved to win, it was a great win for Duke and a tough loss for UNLV,” Tarkanian said. “I just feel so bad for the kids, because they're the greatest group of kids I've ever been around. I just hurt inside for them.”

Hunt finished with 29 points, the same as in last year's title game, when he was named MVP. It was the absence of his backcourt mate over the final four minutes that made a huge difference.

Greg Anthony drew his fifth personal foul with 3:51 left when he was called for a charge. The basket was disallowed, and UNLV had lost its point guard and defensive specialist for crunch time.

It made a difference. UNLV had the shot-clock violation and failed to move the ball as crisply as usual in the final minutes.

“When Greg was out of there, we were a little out of sync,” Tarkanian said.

Duke trailed 43-41 at halftime, another improvement from last season when the Blue Devils were down 47-35 at intermission.

Davis finished with 15 points, and Hurley had 12 and Grant Hill 11.

Anthony had 19 points and six assists, while Johnson had 13 points and 13 rebounds.

The Runnin' Rebels finished with a 40-26 rebound advantage, but couldn't come up with one as big as Laettner's with 12.7 seconds to play.

Duke jumped on top 15-6 four minutes into the game, one point shy of the largest deficit UNLV faced all season.

The Runnin' Rebels quickly came up with an 8-0, dominating the boards, especially on the offensive end — 11 offensive rebounds to Duke's two in the first half and a 24-12 overall advantage.