Apple Cup rivalry tops this week in the Pac-12 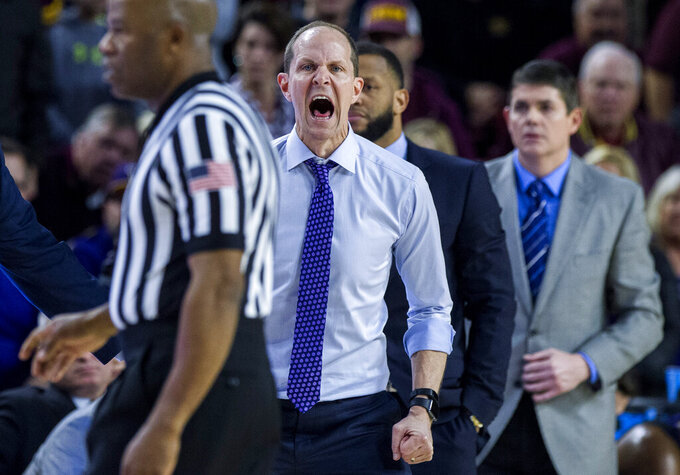 Washington coach Mike Hopkins shouts to his team during the second half of an NCAA college basketball game against Arizona State on Saturday, Feb. 9, 2019, in Tempe, Ariz. Arizona State won 75-63. (AP Photo/Darryl Webb)

GAME OF THE WEEK: Washington (19-5, 10-1) at Washington State (10-14, 2-8), Saturday. The Huskies will be big favorites in this rivalry game, but don't count out the Cougars after last week. Washington State pulled off one of the conference's rarest road sweeps, knocking off Arizona and Arizona State last week for the first time since 2007. Robert Franks was a big reason for it, scoring 34 points against the Sun Devils and 31 against the Wildcats. Washington has been the Pac-12's dominant team, building a three-game lead by the midpoint. The Huskies still have a three-game lead despite splitting games on their Arizona road trip last week, matching Sam Houston State in the Southland for Division I's largest conference lead.

LOOKING AHEAD: The Apple Cup isn't the only rivalry game in the Pac-12 this week. Oregon plays at Oregon State on Saturday in a rematch of a game played on Jan. 5. The Beavers won the first round 77-72 behind Tres Tinkle's 28 points and enter the rivalry game with three wins in four games. The Ducks have won four of five after sweeping the Northern California schools last week. It will be the 352nd meeting, most in college basketball history. The Beavers will be trying to sweep the season series for the first time since 2009-10.

INSIDE THE NUMBERS: Road teams have a .454 winning percentage in conference games this season after going 8-4 last week. The all-time mark under the 18-game format is .467 in 2007-08. ... Two games separate second and 10th place. Arizona State, Oregon State and Utah are tied for second at 7-4. ... Oregon State's Kylor Kelley still leads the nation in blocked shots at 3.48 per game.

PLAYER TO WATCH: Franks, Washington State. The Cougars' high-scoring guard had a spectacular week, averaging 32.5 points while shooting 65 percent and grabbing 10.5 rebounds in two games. He was named national and Pac-12 player of the week.

ON THE WOMEN'S SIDE: The women's version of the Civil War rivalry will take place twice in a span of three days. On Friday, No. 9 Oregon State plays at No. 3 Oregon, then the two meet on Monday in Corvallis. Keep an eye on the matchup between Oregon's Sabrina Ionescu and Oregon State's Destiny Slocum, both finalists for the Nancy Lieberman Award for the nation's best point guard. The Ducks have yet to lose in conference play (10-0) and have a two game lead over the Beavers.