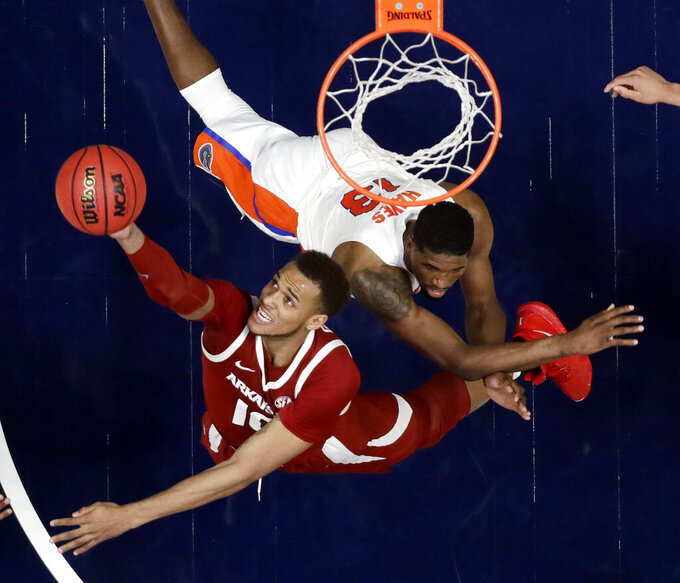 Arkansas forward Daniel Gafford (10) reaches for a rebound in front of Florida center Kevarrius Hayes (13) in the second half of an NCAA college basketball game at the Southeastern Conference tournament Thursday, March 14, 2019, in Nashville, Tenn. Florida won 66-50. (AP Photo/Mark Humphrey)

FAYETTEVILLE, Ark. (AP) — Arkansas forward Daniel Gafford has declared for the NBA draft and will not play in the NIT, where the Razorbacks faced Providence on Tuesday night.

Coach Mike Anderson said Monday he supports Gafford's decision and believes he will be a first-round draft pick. Gafford, a 6-foot-11 first-team all-SEC pick, could have left last year but returned to Arkansas.

His decision to skip the NIT follows a trend set by football players who sit out bowl games that aren't part of the playoffs so they don't risk an injury that could affect their draft position.

Gafford was the only player in the SEC to rank among the top five in scoring (fourth, 16.9 points per game) and rebounding (second, 8.7 rpg). In two seasons at Arkansas, he averaged 14.3 points and 7.4 rebounds while piling up 141 blocks and shooting 63.5 percent from the field.