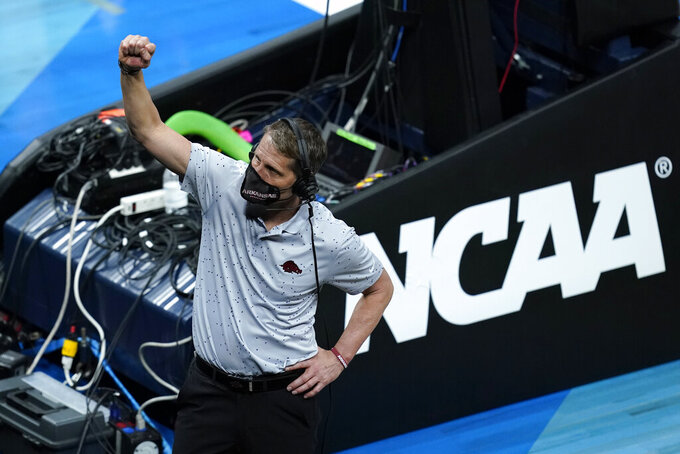 FAYETTEVILLE, Ark. (AP) — Arkansas said Wednesday it has signed coach Eric Musselman to a new five-year deal that could keep him with the Razorbacks through the 2028 season.

The agreement, coming a month after Arkansas reached its first NCAA Tournament Elite Eight appearance in more than 25 years, will run from May 1 through April 2026 and includes the potential for a pair of one-year automatic agreement extensions if the Hogs receive NCAA tourney bids “within the timeframe of the agreement.”

Arkansas lost to eventual national champion Baylor in the South regional final and was the only team to play the Bears to within single digits during the NCAA tournament. The Razorbacks finished No. 10 in the final Associated Press poll, which does not factor in NCAA Tournament play.

“Coach Musselman earned this opportunity based on the tremendous progress that he and his coaching staff have made in the past two seasons, culminating with the most exciting season in the recent history of Razorback basketball," athletic director Hunter Yurachek said.

Musselman will receive $4 million in annual compensation, with additional compensation available based on longevity and “success in the SEC and NCAA Tournament.”

“Arkansas is one of the premier programs in the nation and my family and I are ecstatic to be here,” Musselman said. “I am grateful for the commitment the university is making to me, my family and the future of our basketball program.”

Musselman is 45-19 in two years at Arkansas and 155-53 in six years as a college head coach. This season, Arkansas advanced to the Elite Eight for the first time since 1995 and won 25 games overall, including 13 in the SEC to finish second in the conference.

The year before Musselman arrived, the Razorbacks went 18-16 and lost in the second round of the NIT Tournament. Arkansas went 20-12 in Musselman's first season. This past season went even better, despite scoring leaders Isaiah Joe and Mason Jones jumping to the NBA. Moses Moody was the first Razorback freshman to earn All-American honors and the first to be a consensus first-team All-SEC selection. The league's Freshman of the Year is the first Razorback freshman to declare for the NBA draft.

“Our staff remains focused on winning basketball games and building our roster for the future,” Musselman said. "We look forward to continuing to build on the foundation we have established in our first two seasons in an effort to achieve even greater success for our program, our university and Razorback fans everywhere.”