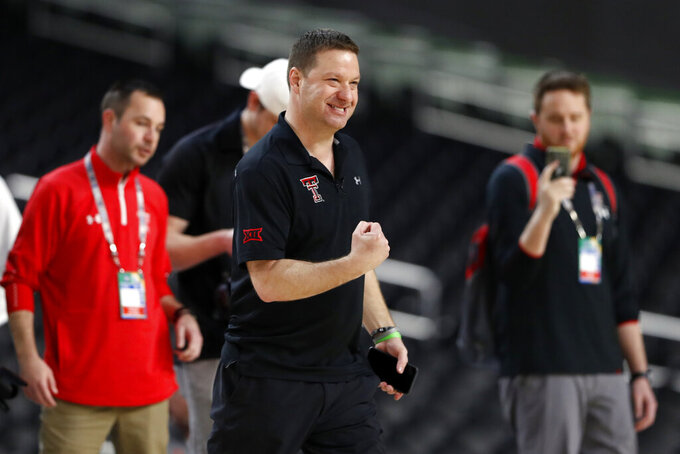 MINNEAPOLIS (AP) — As a young Texas Tech assistant, Chris Beard liked to unwind from a hectic day by heading to the late-night movies. No cellphone, no interruptions, just Beard and a mostly-empty movie theater.

On more than one occasion, he looked over and saw Mark Adams, the coach at nearby Howard Junior College, in the theater watching the same movie. The two already knew each other in basketball circles and pretty soon were going to the movies together two or three times a week.

Both are movie buffs, but the late-night gatherings were more about comradery and basketball than the flick.

"We would sit next to each other because we talk basketball," Beard said. "It really didn't matter what the movie was."

The two long-time friends are now writing their own script in Minneapolis.

Sparked by Beard's tenacity and a defense spawned in Adams' ample mind, the Red Raiders are on the cusp of the biggest game in program history.

Saturday night's matchup with Michigan State will be the first Final Four in 93 years of Texas Tech basketball. It's also the culmination of ideas germinated from those early basketball-talking, movie-watching West Texas days.

"I feel like the luckiest coach in America to be here in this setting," Adams said. "It's always been a dream to coach on this national stage in the Final Four. Coach Beard, I've known him forever, but he still surprises because it's something daily that he comes up with that's unique and impressive."

Beard's 12-stop journey took him across the spectrum of basketball: Midwestern junior colleges, Division II schools, the ABA in South Carolina, back to Division I in the South.

The basketball lifers reconnected in 2015 at Arkansas-Little Rock, where Beard, using Adams' attacking defense, led the Trojans not only to a massive turnaround but an upset of No. 5 seed Purdue in the NCAA Tournament.

Little Rock's Cinderella run made Beard a hot coaching commodity and, after a short, aborted stint at UNLV, it landed him back in Lubbock to lead the Red Raiders.

Adams followed and they orchestrated a quick turnaround in Lubbock, taking a program with one NCAA Tournament the previous decade to its first Elite Eight a year ago. The Red Raiders took another leap this year, sharing the Big 12 regular-season championship and marching through the bracket to the Final Four.

And it's no ordinary defense.

Basketball coaches are not shy about borrowing concepts from other coaches. See something that works for another program or in the NBA and it gets quickly adopted.

Adams hatched Texas Tech's diabolical defense on his own.

The main goal of the defense is to keep teams out of the lane, so the Red Raiders pack it in, forcing teams to the perimeter and to the baselines.

Texas Tech also attacks the offense rather than sitting back and react, "icing" ball handlers on ball screens by angling them away from the middle. Forcing a ball hander to the sides of the court limits his options and effectively turns the sideline into a sixth defender.

This season, Texas Tech had the best adjusted defensive efficiency — 84.1 points per 100 possessions — since KenPom.com began tracking the stat in 2002, and it has held teams to 57 points per game in the NCAA Tournament.

"Coach Adams is the best defensive coach I've ever seen," Beard said. "Mark Adams has a way about defense and it's been a big part of our team, our identity."

Adams is a taskmaster in practice, often making players rerun Texas Tech's infamous "Kill Drill" — three straight possessions with a defensive stop — if someone was in the wrong place or wasn't talking.

As a way of luring players into his office to talk defense, Adams has a stash of candy out to keep them in there watching film. The longer they stay, the more candy they get.