Ayayi gets Zags' 1st ever triple-double in rout of Portland 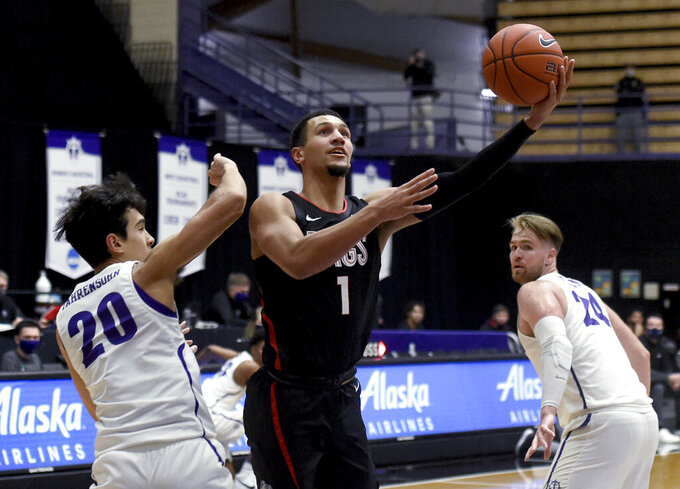 PORTLAND, Ore. (AP) — Joel Ayayi figured it was only a matter of time before he got a triple-double.

It happened on Saturday: Ayayi had 12 points, 14 assists and 13 rebounds, and top-ranked Gonzaga routed Portland 116-88 for their 16th straight win.

It was the first triple-double in the Bulldogs' history — which is saying something given the talent that has come through Spokane.

“I had a feeling it was bound to happen at some point to be honest, and I’m just lucky and thankful it happened today,” he said.

Even coach Mark Few was surprised it was Gonzaga's first. He noted that former Bulldogs Domantas Sabonis and Blake Stepp were certainly capable but never reached the milestone.

“It's quite an accomplishment, anytime you get a triple-double, it just shows how engaged you are in the game, and just how many good things you do to help your team win,” Few said. “And that's obviously what Joel does. He's got a knack for winning.”

It was Gonzaga's first “true” road trip of the season — the team played a number of early season neutral site games.

The Zags were coming off an 89-62 victory over BYU in Spokane on Thursday. Corey Kispert had 23 points in the game, which was hastily scheduled after both teams lost opponents because of COVID-19 protocols.

Kispert, who leads the WCC in scoring, finished with 14 points against Portland.

Ayayi, a junior guard from France, was the reigning WCC Player of the Week after collecting three double-doubles last week. He had a conference-best four double-doubles heading into the game against the Pilots.

Leading the nation in scoring offense, Gonzaga has 85 or more points in every game this season.

Portland hung with the Zags at the start, but starting forward Eddie Davis collected two early fouls and went to the bench. The 6-foot-6 junior was averaging 11.2 points and 5.2 rebounds heading into the game.

Gonzaga started pulling away midway through the first half when Ayayi's jumper made it 23-16. The Zags stretched the lead to 39-25 on Anton Watson's layup and led 56-35 at the half.

The Zags were 0 for 6 from 3-point range in the opening half. Kispert hit the team's first 3 at 3:37 into the second. Instead, Gonzaga had 80 points in the paint, compared to Portland's 26.

“I thought we played offense pretty good most of the night. Guys just took what was theirs, especially that top six or seven,” Few said.

Seven Gonzaga players were in double figures and the Bulldogs led by as many as 36 points.

The Pilots were coming off an 88-64 loss at San Francisco on Thursday.

Gonzaga: The Bulldogs were one of nine unbeaten teams in the nation. ... Few is 40-2 against Portland as coach of the Zags. ... Guard Aaron Cook was on the floor after missing two games with a leg injury.

Sophomore Anton Watson, a 6-foot-8 local kid from Spokane, finished with a career-high 23 points. Few said it was nice to see Watson get his offense going.

“He's got incredible hands on the defensive end and he does a nice job connecting all our actions in our offense, and defensively we're able to do some things that maybe we can't with our other bigs," Few said.