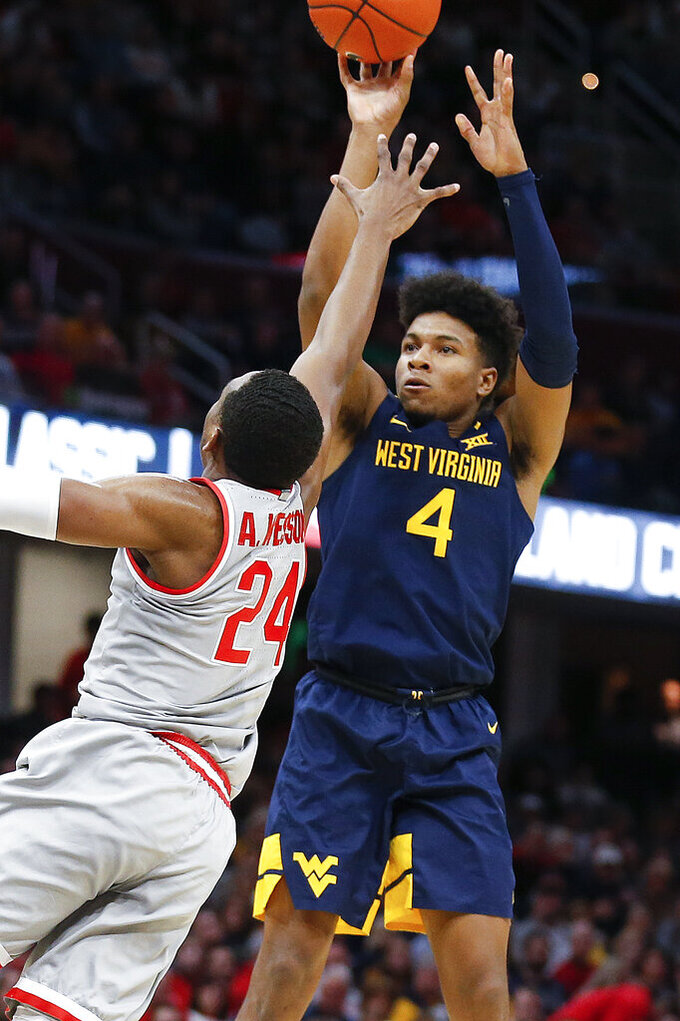 LAWRENCE, Kan. (AP) — A look at the upcoming week around the Big 12 Conference.

GAME OF THE WEEKEND: No. 16 West Virginia heads to Allen Fieldhouse to take on third-ranked Kansas on Saturday in what few had circled on the calendar just a few months ago. The Mountaineers (11-1) are coming off a dominant victory over then-No. 2 Ohio State, beat No. 24 Wichita State earlier this season, and their lone loss in what many thought was a rebuilding year came by two points on the road against St. John's. The Jayhawks (10-2) lost to Duke in their opener but have otherwise taken care of business outside a last-second loss at No. 10 Villanova.

LOOKING AHEAD: Texas visits sixth-ranked Baylor, another surprise team during non-conference play, on Saturday night to start what could be a crucial Big 12 seasons for Longhorns coach Shaka Smart. ... The Mountaineers continue a tough start by facing Oklahoma State at Gallagher-Iba Arena on Monday night. ... The Bears head to No. 22 Texas Tech on Tuesday night for a marquee midweek match-up.

PLAYER TO WATCH: Jayhawks point guard Devon Dotson has followed in the footsteps of Frank Mason III and Devonte Graham in becoming the trigger-man for the league's perennial juggernaut. Dotson is averaging a Big 12-best 18.8 points and fifth in assists at 4.6 per game. He's also been a model of consistency, scoring at least 13 points in every game, so far.

INSIDE THE NUMBERS: The Big 12 went 91-28 during the non-conference season with only the Big 12-SEC Challenge games on Jan. 25 still to play. That winning percentage is second nationally. ... Kansas center Udoka Azubuike leads the nation in field-goal percentage at 79.8%, but he may be one of the worst foul shooters at just 31.8%. ... Kansas State's Cartier Diarra had 25 points, seven assists and five rebounds in a nip-and-tuck win over Tulsa last week. ... TCU's Desmond Bane scored 21 of his game-high 30 points in the first half of the Horned Frogs' win over High Point.

ON THE WOMEN'S SIDE: The Big 12 has three ranked teams with sixth-ranked Baylor followed by No. 19 West Virginia and No. 25 Texas. ... Kansas (11-0) and Texas Tech (11-0) are the lone remaining unbeaten teams. Both are receiving votes in the AP poll. ... The Lady Bears got preseason All-America forward Lauren Cox back last week. She had missed the first seven weeks with a right foot injury. ... While league play begins this weekend, the biggest game coming up on the schedule comes when the Lady Bears visit top-ranked Connecticut on Thursday night.