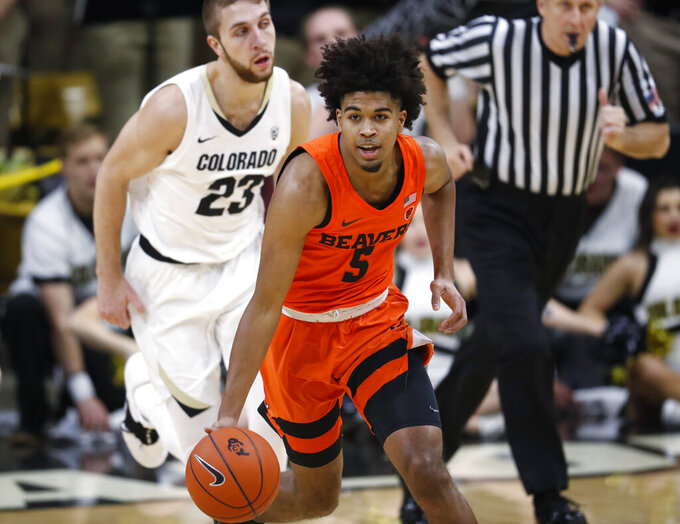 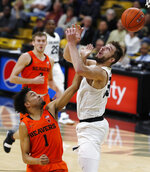 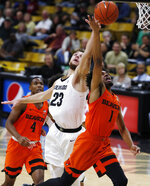 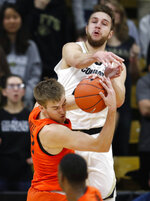 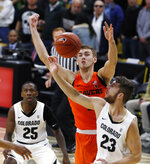 BOULDER, Colo. (AP) — Oregon State was dominated down low in the first half. The Beavers turned it around in the second half and came away with a big road win.

Oregon State attacked the basket after a fiery halftime talk, hitting eight layups and a dunk in a 76-74 win over Colorado on Thursday night. The Beavers were outscored in the paint 26-16 in the first 20 minutes but had a 22-12 advantage after halftime.

"We were pretty upset at halftime when we looked at the disparity of points in the paint," Oregon State head coach Wayne Tinkle said. "They manhandled us, whether it was on post-ups or drives, so we got after our guys pretty good. We needed to flip that in the second half. Our guys pinned their ears back coming out of the locker room."

Stephen Thompson Jr. scored 21 points, Tres Tinkle had 19 points and eight rebounds and Ethan Thompson had 14 points, including a dunk that ignited an 8-4 run late to help the Beavers (13-7, 5-3 Pac-12) to the win.

"It was a close game, we just kept battling, we made plays for each other," Tres Tinkle said. "We missed some free throws but we made them when it counted."

McKinley Wright IV led Colorado with 18 points and Evan Battey had six of his 16 points late in the second half. Colorado lost for just the third time at home this season.

Colorado had struggled with slow starts earlier in the season but has faded in the second half in two straight losses.

The game was close throughout the second half and went back-and-forth in the final three minutes. Colorado went 7-1/2 minutes without a field goal after D'Shawn Schwartz's 3-pointer tied it at 60. The game was knotted 65-65 until Ethan Thompson had a dunk off a turnover with 3:01 to play.

Battey answered with a layup, and he and Thompson traded buckets to tie it at 69 late. Oregon State's Gligorije Rakocevic broke the tie with two free throws and, after a Colorado turnover, Tinkle was fouled and drained both foul shots to give Oregon State a 73-69 lead with 37.2 seconds left.

Thompson Jr. gave the Buffaloes hope when he went 2 of 4 from the line in the final minute but Wright — who knocked down a 3 to make it a one-point game with a second left — missed a desperation shot at the buzzer to send Colorado to its sixth loss in eight conference games.

"Our team is on a roller coaster right now," Battey said. "It definitely hard because guys head start hanging when they miss a shot or when they're not playing well they're hanging down. It's everybody's responsibility to lift each other up."

Colorado (11-9, 2-6) used a pair of 9-0 runs and survived a four-minute scoring drought to take a 40-35 lead at halftime. The Buffaloes had just 18 points with 6:45 left but outscored the Beavers by 10 until Thompson Jr. hit a shot just before the break to cut it to five.

Neither team shot well from the foul line. Colorado came into the game hitting 71 percent of its free throws but was 10 of 20 from the line until Wright hit four straight to make it 65-65 before the last media timeout.

Oregon State struggled from the line in the second half. The Beavers missed four straight at one point and were 15 of 25 on free throws in the game.

Oregon State: The Beavers were stumbling after winning their first three conference games but are now positioned to make a run to the top of the Pac-12. After Saturday, Oregon State plays three straight home games.

Colorado: The Buffaloes played five of their first seven conference games on the road and it showed in the standings. Colorado, including Thursday's loss, has seven of its last 11 at Coors Events Center to try to gain traction in the Pac-12.

Oregon State: At Utah on Saturday.