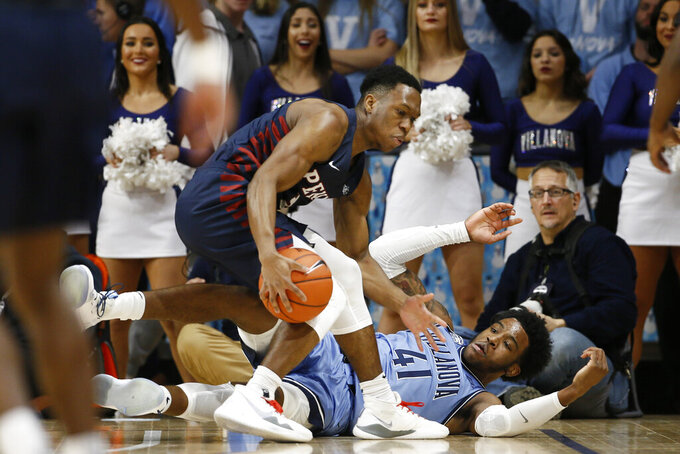 VILLANOVA, Pa. (AP) — Saddiq Bey kept another surprise defeat at bay for Villanova, and again made the Wildcats the top contender for another city championship.

Bey scored a career-high 27 points and Jeremiah Robinson-Earl had 13 points and 12 rebounds to lead No. 23 Villanova to an 80-69 victory over Penn on Wednesday night.

The Wildcats (6-2) finally pulled away from the Quakers over the final 2 minutes to avoid a second straight loss to their Philadelphia basketball rivals. Justin Moore converted a three-point play to give Villanova the breathing room it needed to hold off pesky Penn (5-4).

"The reason those games are like that and always have been is because we all know each other," coach Jay Wright said.

Jordan Dingle and AJ Brodeur each scored 18 points for Penn. Moore finished with 17 for the Wildcats.

The Quakers pulled off one of the biggest upsets in Philly hoops history last season when they knocked off the national champion Wildcats 78-75 at the Palestra. The Wildcats had won a city-record 25 straight games against Big 5 rivals Temple, Saint Joseph's, La Salle and the Quakers. Penn would win the Big 5 title but not the Ivy League crown that could have sent it back to the NCAA Tournament.

The Quakers came out determined to prove they were no one-upset wonder. They forced the game into the paint and kept the Wildcats from relying on the 3 to put them away. Brodeur scored 12 points and the Quakers had the game tied at 30-all late in the first half.

Jermaine Samuels swayed the game toward Villanova on a monster block on Devon Goodman's fast-break attempt and Bey capitalized with a thunderous jam on the other end that brought the fans to their feet. The dunk gave Bey 23 points, one better than his career high set earlier this season against Army.

Much like last season, the Quakers weren't going away. Goodman buried a 3 and quickly dunked off his own steal to bring the 11½-point underdog Quakers within four midway through the second half. Dingle hit a 3 to make it a one-point game and suddenly the thought of another shocker was in full force on Villanova's campus. Penn students stormed the court, tossed streamers, hopped around at midcourt, and mobbed the players after last season's win at the Palestra.

Robinson-Earl is a freshman and had nothing to do with the defeat, and knew even less about the Big 5. But one big game against the Quakers — hardly confused with the powerhouse programs the Wildcats beat in March — changed his perspective on the rivalry's meaning.

"The coaches have told me, the players have told me, it's just so important," he said. "I don't know a lot of the history about it but I can see from the energy Coach gives about how important it is."

The fans inside the Pavilion were all but silenced when the Quakers made it 48-47. The Quakers kept driving inside to keep the deficit within single digits and Dingle got a rise out of the Penn bench on a two-handed dunk. Try as they might, the Quakers couldn't stop Bey and couldn't go on enough of a run to ever take the lead. Goodman hit Penn's seventh 3 to make it 68-64 with Bey on the bench with four fouls.

"I don't know if we were ready for the physicality he brought to the game," Brodeur said. "He scored a lot of points at the basket."

The Wildcats held Penn to only five points over the final 4 minutes to hang on for the tougher-than-necessary victory.

"Three minutes to go, I thought the plan was working," Penn coach Steve Donohue said. "We just kind of ran out of gas on the offensive end.

Penn: The Quakers have never won on Villanova's campus, falling to 0-12.

Villanova: The Wildcats have 26 Big 5 titles, second to Temple's 28. Villanova won five straight before the Quakers ended the run last season but the Wildcats seem poised to go hard after another city title this season. They are 2-0 this season.

Penn: The Quakers have a long layoff until they host Widener on Dec. 21.

Villanova: The Wildcats play Sunday at Saint Joseph's in traditionally the biggest city hoops game of the season.