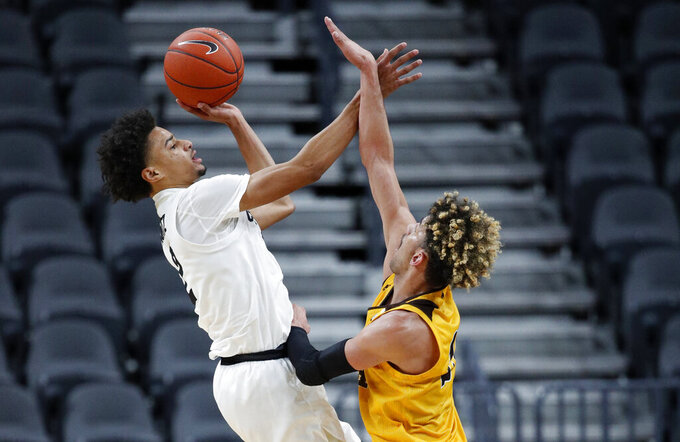 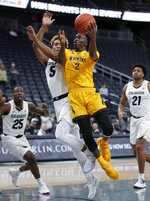 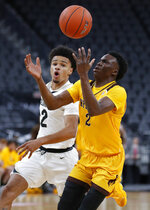 LAS VEGAS (AP) — Colorado's Tyler Bey has always enjoyed returning to his hometown to play during the Pac 12 Tournament.

On Sunday night, the junior forward finally had a chance to shine early in the regular season.

"It's an amazing feeling," said Bey, who attended Las Vegas High School. "It's great to play good in my city in front of my family and friends. It's great honestly, but we have one more game to take care of."

Bey, who has 22 career double-doubles and 12 in his last 19 games, accomplished the feat for the third time in four games this season. D'Shawn Schwartz scored 12 points, while Evan Battey added nine points and 13 rebounds for Colorado.

Bey set the MGM Resorts Main Event record for rebounds, topping the previous mark of 17 by UNLV's Brandon McCoy in 2017.

The Buffaloes (4-0) overcame a sluggish first half and used a 13-0 run over the first four minutes of the second half to open a 28-15 lead and seize momentum.

The run was sparked by Schwartz's monster block on Maldonado, his close friend from their hometown of Colorado Springs. Schwartz, whose time was limited in the first half after getting into foul trouble early, then ignited the run by scoring seven of the 13 points.

"I was tired of sitting, I just wanted to go out there and make an impact on the game," Schwartz said. "Nobody was really making shots, their energy was dead, so I just wanted to make sure I could turn the game up when I got in."

The Cowboys (3-4) got as close as four points, with 9:19 left in the game, but Colorado went on another run, outscoring Wyoming 13-1 over the next five minutes to put the game out of reach.

"Where I thought it hurt was obviously us taking care of the basketball, which allowed them to get out for some opportunities," Wyoming coach Allen Edwards said. "I did love the fight of our guys. We found some way to cut it back down. Their will was just a little bit stronger than ours."

Neither team started out with any sort of jump, as Colorado led just 4-2 at the 11:53 mark of the first half.

Early on, the Buffaloes struggled to get the ball movement they're used to and were limited with their touches in the paint. Colorado came into the game averaging 73.7 points per game on 42.3% shooting but hit just two of their first 11 shots.

Wyoming was worse. After six games, the Cowboys were averaging 57.8 points on 41.6% shooting, but made a bleak 10 percent of their first 10 shots.

"Halftime message was it's hard for us to play any worse offensively," Colorado coach Tad Boyle said. "I thought it was really a sign of maturity that our players did not let their frustrations on offense bleed over to the defensive end. And I think that's one positive you can take out of it.

Colorado: The Buffaloes continue to struggle from the free-throw line. They came into the game averaging 65.1%, and finished by hitting just 9 of 20 (45%).

Wyoming: The Cowboys have done a good job on capitalizing on turnovers this season. They came into the game with 71 points off turnovers — an average of 11.8 per contest. Sunday the tables were turned, as they committed a season-high 19 turnovers, including seven by senior starting point guard A.J. Banks. Colorado scored 17 points off Wyoming's mistakes.

HOME MEANS NEVADA: Banks and Bey had their own cheering sections on opposite sides of T-Mobile Arena, as the Las Vegas-area products were welcomed by exuberant friends and family. Banks attended Cheyenne High School in nearby North Las Vegas.

SINGING SURVIVOR: Singing the National Anthem was 12-year-old cancer survivor Danica Ruiz, who was born with a mass in her right lung. Ruiz underwent surgery at six months old to have the mass removed.

Colorado faces the winner of the TCU-Clemson game in the championship on Wednesday.

Wyoming will meet the loser of the TCU-Clemson contest on Wednesday in the consolation game.