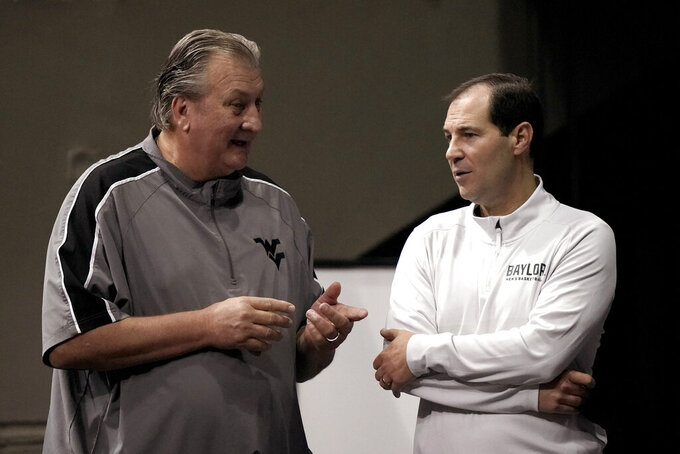 KANSAS CITY, Mo. (AP) — No. 8 Baylor is in a period of transition with some key departures from last year’s national championship team.

Coach Scott Drew said Wednesday there have been plenty of guys stepping up in practices to fill the gaps.

Drew noted that the Big 12 has had a representative in the Final Four in each of the last three years. He’s hoping this is the year that the conference has three representatives.

“It takes some luck to have that accomplished, but this is another year where that’s possible,” he said. “A lot of teams will have that possibility.”

There aren’t a lot of expectations for T.J. Otzelberger’s squad, but he has been impressed with how much the players have bought in to his expectations.

“We’re demanding in what we expect in how they conduct themselves on a daily basis,” he said. “We’ve been pleased with how they’ve taken on that process.”

The third-ranked Jayhawks will look to have a regular 10-man rotation, but coach Bill Self said the trouble won’t be finding the minutes for 10 guys.

“The challenge to me is how do you get from 14 to 10,” he said, “because 1 through 14 we probably never had a team with as many guys that are pretty similar to other guys.”

Once again, Kansas is the preseason pick to win the conference. That doesn’t bother Self.

“I would rather be picked high than not picked high,” he said. “When you play at Kansas, pressure is something that usually is good.”

Bruce Weber feels especially glad for “super” senior Mike McGuirl, who was supposed to redshirt in 2017-18 but suited up for K-State late when Kamau Stokes got hurt.

“I always felt bad, because he didn’t get all the minutes and the practice time (his) freshman year,” Weber said. “I always say, God has a plan for you.' Now here is his opportunity to come back.”

Unlike the other two new head coaches in the Big 12, Porter Moser has never played or coached in the conference, coming over from Loyola Chicago. He said he has been impressed from a distance, and he can’t wait to see the conference in person.

“I’ve known a lot of the coaches,” he said. “It’s an unbelievably coached league. Watching from the outside, knowing these guys, you can see how hard every team defends.”

Moser said that retired Oklahoma coach Lon Kruger has been great during the transition.

“Obviously he’s a Hall of Fame coach, but he’s one of the best human beings in our profession,” he said. “It’s an honor to follow a guy like that.”

Last year’s No. 1 overall NBA draft pick Cade Cunningham is gone, and coach Mike Boynton is depending on Isaac Likekele for leadership.

“A lot was made of Cade, as it should have been,” Boynton said. “Ice has to be our leader. He’s been through the most. Now we need him to step up and be that guy who passes along our message.”

Jamie Dixon had one transfer in his 17 years at Pittsburgh before returning to his alma mater in 2016-17. But he considers this a “new era” and he has embraced the transfer portal.

Two of his key transfers — Emanuel Miller (Texas A&M) and Micah Peavy (Texas Tech) — came from Power Five programs, and Dixon said much will be expected of the pair.

“These are guys who have played in major conferences,” Dixon said. “They’ve gone through the battles. Their bodies are more developed than a freshman.”

One returning player that Dixon will count on will be guard Mike Miles.

“He was a little under the radar coming out of high school,” Dixon said. “I think he’s more of a leader, which comes with being a second-year guy in our league. That makes you old in this league.”

New coach Chris Beard won’t have much of a honeymoon period as the Longhorns are ranked No. 5 in The Associated Press preseason poll.

Beard says the perception of his team is not accurate.

Beard made his reputation as a defensive coach, most recently at Texas Tech, and the biggest challenge will get the new players to buy in. The Longhorns have four players who were part of the roster last year. They added eight from the transfer portal and three high school recruits.

“We don’t give out anything,” he said. “You get what you earn. I think everybody understands what they have to do to get the role they’re trying to get.”

Coach Mark Adams grew up 30 miles from Lubbock. He said Texas Tech is his destination job.

“When I left Texas Tech I went to six other institutions,” he said. “Those six stops, every one of them along the way, my destination was to get back here.”

Adams has been the architect of the defense that has been Tech’s trademark the last few years. His only regret is letting other coaches copy it.

“It’s flattering to have other people copy your defense,” he said. “The only thing I’m upset about is Baylor copied it, and now they run it better than we do.”

The biggest transfer for Tech is Kevin Obanor, who helped Oral Roberts to the Sweet 16 in last year’s NCAA Tournament.

Defense has been a trademark for coach Bob Huggins, but that may not be the case this year. Huggins said he has plenty of guys who can shoot from the outside.

“I think we can make shots,” he said. “I don’t know if we can guard anybody and keep them from making shots.”