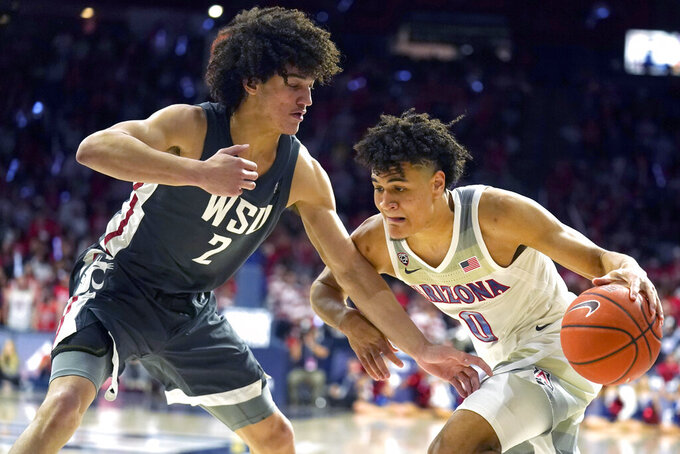 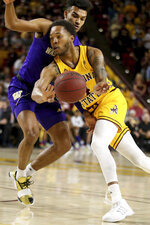 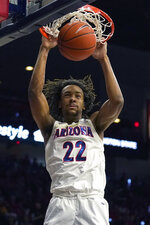 TUCSON, Ariz. (AP) — Arizona struggled to get shots to fall and had careless turnovers, spending the first half looking like the worst version of itself.

The Wildcats got stops, raced out into transition and dropped in waves of 3-pointers during a massive second-half run, showing off the best version of themselves.

The key now is to encapsulate the good from Thursday night and take it with them to Las Vegas next week.

Nico Mannion scored 15 of 23 his points in the second half, Zeke Nnaji added 21 and Arizona raced away from Washington State for an 83-62 victory.

“We certainly have it in us and when we're playing very good defense and offense, I feel like we can play with anybody,” Arizona coach Sean Miller said. “I feel like we've proven that.”

The Wildcats (20-10, 10-7 Pac-12) labored through a lethargic first half, managing to keep the Cougars close behind Nnaji's 14 first-half points.

Mannion took over in the second half and Arizona turned a close game into a rout with a 26-0 run to end a three-game losing streak.

The win keeps Arizona in the running for a coveted first-round bye in next week's Pac-12 Tournament.

"When we're locked, we're a really confident group, getting stops, getting out in transition,” said Mannion, who had seven assists. “That's when we're at our best.”

"We turned it over a couple times and it went from three to six, and we kind of hung our heads,” Washington State coach Kyle Smith said. “It went from up five to down 20 pretty quick and they have that ability to that.”

Arizona went from being in the hunt for the Pac-12 regular-season title to fighting for a first-round bye.

The Wildcats arrived back at McKale Center after losing three straight, the last one 69-64 to UCLA on Saturday after coach Sean Miller was ejected in the second half.

That left Arizona in a logjam with Stanford, Colorado and Southern California with seven losses entering the final week.

Arizona beat Washington State 66-49 in Pullman last month after the Cougars shot 3 for 18 from the 3-point line.

Washington State again had trouble finding the range early against Arizona in the rematch, going 4 for 19 from the arc.

The Cougars led 31-29 at halftime, though, because the Wildcats weren't much better — except for Nnaji.

The 6-foot-11 freshman had his way with the Cougars inside early and continued to cause problems even after they started double teaming him. He hit 6 of 9 shots while the rest of the Wildcats combined to go 6 for 22.

“He's just a relentless motor,” Smith said. “To be a freshman and compete that hard on every possession is pretty impressive.”

Mannion got it going early in the second half, scoring nine quick points, and Arizona fed off his energy, reeling off 26 straight to go up 58-38.

The Wildcats shot 20 of 34 in the second half, including 6 of 8 from 3, and held Washington State without a field goal for 9 1/2 minutes.

“The confidence that might have been lacking in the first half, it came back to us,” Miller said.

Washington State did a nice job of making it a grinding game in the first half, but had no answer when Mannion and the Wildcats got rolling. Arizona won a game it couldn't afford to lose with a stellar second half, keeping alive its hopes of a first-round Pac-12 tournament bye.

Arizona was without two players, but got a key one back.

Big man Chase Jeter was suspended for the final two regular-season games for violating team rules and guard Max Hazzard didn't play for the second time in three games due to personal reasons.

Josh Green was back after missing two games with a back sprain and looked as if he never left.

The athletic freshman was quick off the dribble, drove hard to the basket and made both of his 3-pointers. He finished with 12 points on 4-of-7 shooting.

“It's not easy to miss a week, be injured, not practice and be away from the team,” Miller said. “In the second half, he found his footing and it was good to see him score in double figures and regain the form we know he has.”