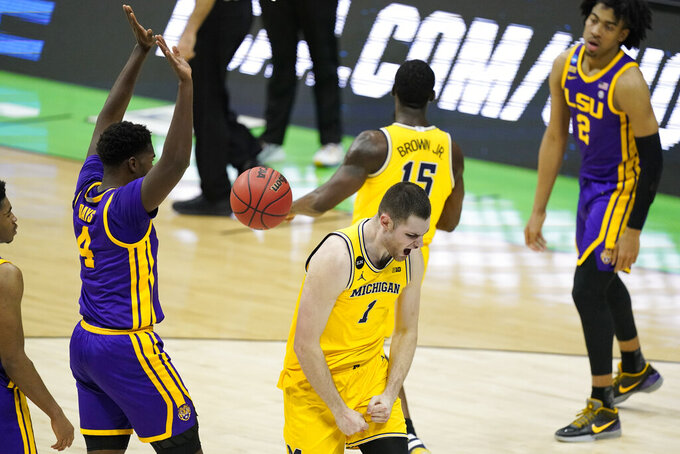 Michigan center Hunter Dickinson (1) celebrates in front of LSU forward Darius Days (4) after making a basket during the first half of a second-round game in the NCAA men's college basketball tournament at Lucas Oil Stadium Monday, March 22, 2021, in Indianapolis. (AP Photo/Darron Cummings)

INDIANAPOLIS (AP) — What the Big Ten needed was someone, anyone, to start playing like it came from the Big Ten.

Thanks to Michigan, the conference is still part of March Madness.

Longer, taller and deeper than LSU, the top-seeded Wolverines slowly wore down the Tigers. They got 21 points each from Eli Brooks and Chaundee Brown Jr., in a roller-coaster 86-78 victory that salvaged some hope for the hurting conference at the NCAA Tournament.

By the time coach Juwan Howard and Co. had returned to the hotel after their second-round game, Maryland had lost to Alabama, leaving the Wolverines as the only ones remaining of the nation-leading nine Big Ten teams who came to Indy.

And though they can't undo what's happened to the rest of the conference, that Big Ten seasoning came in handy in this one — a game Michigan (22-4) trailed in by nine early and had to fight to stay in range.

“That's the test of the Big Ten, honestly,” Brooks said. “We get tested every night.”

In a game full of big runs, the Wolverines used the biggest -- 14-1 over the decisive stretch midway through the second half -- to pull away and save face for a conference that has otherwise tanked these four days in Indianapolis.

The Wolverines moved on to their fourth straight Sweet 16, where they'll play No. 4 Florida State next weekend. They'll represent the only chance left for a conference that has lost everyone, from No. 1 seed (Illinois), to No. 2 Ohio State, all the way down to 11th-seeded Michigan State, a perennial power that went out in the play-in round.

“I mean, it’s March Madness for a reason,” Brooks said. “You’re going to get the best shot from everyone. I still think the Big Ten is a really good conference. We just had some losses.”

After the Wolverines took a one-point lead into halftime, this game had massive momentum swings: an 8-0 run early for LSU; a 10-0 streak for Michigan; another 5-0 run for the Tigers.

But during the 14-1 stretch that opened things up, Michigan did what typical Big Ten teams are supposed to do. Even without injured guard Isaiah Livers, they were able to wear down a smaller, less-deep opponent with height and shooting.

Most-telling stat of the night was points off the bench: Michigan 26, LSU 2.

“They’re a tremendous, tremendous team,” LSU coach Will Wade said. "Coach Howard and their staff, their offensive execution, the way they moved, the way they guard, they’re a very, very good team. They’re going to be an extremely tough out for anybody.”

Brown, the 6-foot-5 guard, did the most-lasting damage, making six free throws and a 3-pointer during the decisive stretch that gave the Wolverines a 72-64 lead with 5:55 left.

Then it was 7-1 freshman Hunter Dickenson (12 points, 11 rebounds) and 6-9 projected first-round NBA pick Franz Wagner (15 and seven) who shut down LSU with defense.

LSU’s Cameron Thomas went from lighting up Michigan to barely being able to get a shot off. He finished with 30 points but it took 23 shots, and he went 3 for 10 in the second half.

One of the misses came on a rejection underneath by Dickenson, and moments later, Javonte Smart suffered the same fate. His 27 points kept LSU in range in the second half, but Wagner altered his shot underneath at the end of that stretch.

The Tigers (19-10) finished shooting 39 percent from the floor, and didn't have many answers on the other end. Michigan shot 53 percent and made 10 of 25 3-pointers.

Though the Tigers lost, the bulk of this game must have induced some head-scratching by bracket watchers across the country.

Nobody with eyes and a cable sports package could have thought Loyola Chicago, which beat the Illini by 13 on Sunday, was an 8 seed. LSU clearly had better than eighth-seeded talent, too.

But Michigan looked like a legit 1, especially once Howard started slamming the table, pulling down his mask and begging for a defensive effort that went lacking, especially in the opening minutes. Thomas got into heat-check territory with 12 points over the first 8 minutes, and not a single of them coming from inside of 15 feet.

Once the Wolverines started defending the perimeter, things changed. They started looking like a Big Ten team again. And the Big Ten’s hopes looked much better than they had a few hours earlier.

“The motto today was... ‘Empty the tank. Empty the tank.’ And our guys did that,” Howard said. “Now, unfortunately, for the teams that didn’t advance, they had earned the right to be here, play in this tournament. But all we do is look at what we can control.”

Livers is out with a stress fracture in his foot, and Howard was direct when asked what his status might be for next weekend: “Out indefinitely.”

With four straight Sweet 16 appearances, the Wolverines have the second-longest active streak, behind Gonzaga with six.