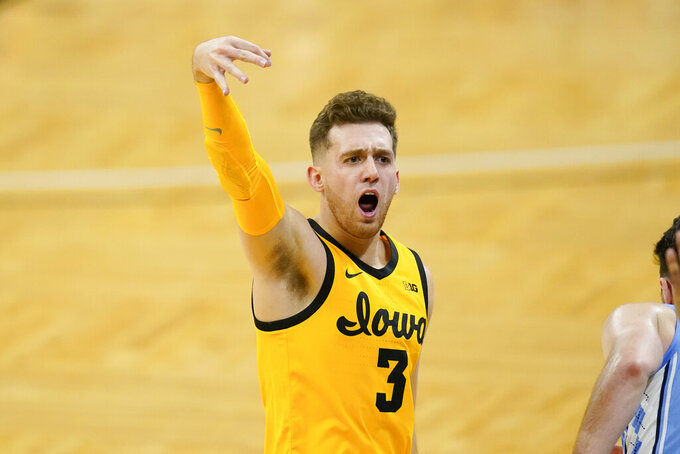 IOWA CITY, Iowa (AP) — Jordan Bohannon said he could have been much better.

Given what he’s been through in the last year, he’ll take the night he had on Tuesday.

Bohannon scored 24 points to lead four players in double figures for No. 3 Iowa, and the Hawkeyes beat No. 16 North Carolina 93-80 in an ACC/Big Ten Challenge game.

Bohannon had scored 11 points in Iowa’s first three games this season. But he got hot from 3-point range, making 7 of 16 attempts, and converted his only shot from inside the arc.

“I didn’t think I shot the ball well,” Bohannon said. “I hit some pretty big shots. But I still thought I had an off day.”

“He’s been shooting it that way every day,” Iowa coach Fran McCaffery said. “If he gets open shots, he’s going to make them. I don’t care who we play. That’s the way he is.”

Bohannon had surgeries on both hips last year, one during the summer and then a second one that ended his season in December.

“I’ve been here for, like, 20 years,” said Bohannon, who is in his fifth season. “I kind of have a lot of experience in my belt.”

North Carolina’s defense slowed Iowa center Luka Garza, who came in as the nation's leading scorer at 34 points per game. Garza had 16 points and 14 rebounds, his 24th career double-double, but his streak of 19 straight games scoring 20 points or more was snapped.

Iowa’s guards, though, were left open because of the way the Tar Heels (3-2) defended Garza, and the Hawkeyes (4-0) took advantage, especially in the first half.

CJ Fredrick had 21 points and Joe Wieskamp added 19 for the Hawkeyes. Frederick, Wieskamp and Bohannon had all 17 of Iowa’s 3-pointers.

“That’s the kind of team we put together,” McCaffery said. “They were physical. They have size. They rotated guys (on Garza). When they’re in like that, you’ve got to move it, move it, move it, and shoot open jumpers.”

Iowa made seven of its first nine 3-pointers. The Hawkeyes opened the game with an 11-2 run and led by as much as 17 points in the first half before taking a 43-31 halftime lead on Fredrick’s 3-pointer.

“We didn’t guard the 3-point shooter,” North Carolina coach Roy Williams said. “And if you go by our defensive principles that we do every single day, then we wouldn’t have allowed those 3-point (shots). And they happened to make a bunch of them.”

Williams said the Tar Heels’ defense on Garza was “OK.”

“I’m going to tell you — Luka Garza is the real deal,” Williams said. “You look at the numbers he’s put up. I think it boils down to one thing. He’s got probably tons more sweat than other guys have, and that’s something I’ve always admired.”

North Carolina opened the second half on a 14-5 run and got to within one point three times before eventually taking a 66-65 lead with 9:52 left on two free throws by RJ Davis.

The Hawkeyes, though, scored 16 consecutive points, a run capped by Bohannon's 3-pointer with 6:57 to play, and they wouldn’t trail again.

“We’re just an experienced team,” Bohannon said. “We know what we need to do to get things done and win games. We knew they were going to make a run. It wasn’t anything we were shocked about.”

Brooks, who was questionable with an ankle injury, started and played 33 minutes. He was injured during the Dec. 2 championship game of the relocated Maui Invitational against Texas.

Iowa got its first win over a ranked team this season. The Hawkeyes opened with victories against North Carolina Central, Southern and Western Illinois. Both of the Tar Heels’ losses have come against ranked opponents.

North Carolina had been scheduled to play Elon on Saturday, but the game was postponed. The Tar Heels play Ohio State on Dec. 19.

Iowa hosts Iowa State on Friday. The Hawkeyes have won three of the last four against their rival.