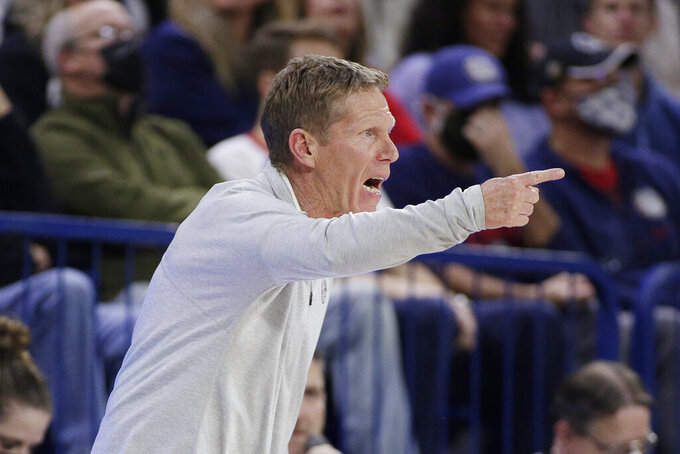 SPOKANE, Wash. (AP) — After a tough week of basketball in Las Vegas, No. 3 Gonzaga might have been looking for a breather at home against unheralded Tarleton State.

The Texans used a high-pressure, swarming defense to hound Gonzaga into 16 turnovers and 47% shooting in a game that was not decided until the final minutes.

“We did a great job of surviving it,” Gonzaga coach Mark Few said.

Tarleton State “puts intense pressure on the basketball,” Few said. “They reach and poke and grab and did a great job of it.”

“Our defense allowed us to stay in it,” Few said. “Our offense wasn't clicking at all.”

Gonzaga rebounded from an 84-81 loss to Duke last week in Las Vegas that knocked the Zags out of the top spot in The Associated Press' Top 25. Duke replaced Gonzaga as No. 1 on Monday, ending a string of 20 consecutive weeks the Bulldogs held the top ranking.

Tahj Small scored 25 points for Tarleton State (1-6), which is in its second season of transitioning to Division I. Javontae Hopkins added 11 for the Texans, who shot 37.5% in the game.

“Two teams that made plays down the stretch,” Tarleton State coach Billy Gillispie said. “They just played harder and better than us.”

Gillispie pointed to a 22-4 deficit for his team in transition points.

“Obviously not good,” he said. “We gave up too many transition layups, especially towards the end of the game, and that's what killed us the most.”

The Texans, who start four guards and a guard/forward, were able to disrupt Gonzaga for most of the game.

The Zags, who average 90 points and lead the nation in field goal shooting, led just 26-25 at halftime. They shot just 35% in the first half and committed nine turnovers while going seven minutes without a field goal.

Small's 3-pointer early in the second gave Tarleton State a 30-28 lead. But a basket by Timme and a 3-pointer by Holmgren put Gonzaga up 33-30.

Few said the three games in Las Vegas last week, including a win over then-No. 2 UCLA, took a toll.

“A lot was expended in those games,” Few said.

Freshman star Holmgren made six of seven field goals for his 15 points, grabbed nine rebounds and blocked four shots. “They just played with super high energy,” Holmgren said of Tarleton State. “They made us work for everything, really.”

Tarleton State: Who built the scrappy Texans' schedule? They have already lost to No. 8 Kansas and No. 24 Michigan this season, along with Wichita State ... Tarleton has not shot above 40% this season against a D-I opponent.

Gonzaga: Plays No. 16 Alabama in the Battle in Seattle on Saturday. Alabama is “a great team with a high, high octane offense,” Few said. “They'll be a handful.”