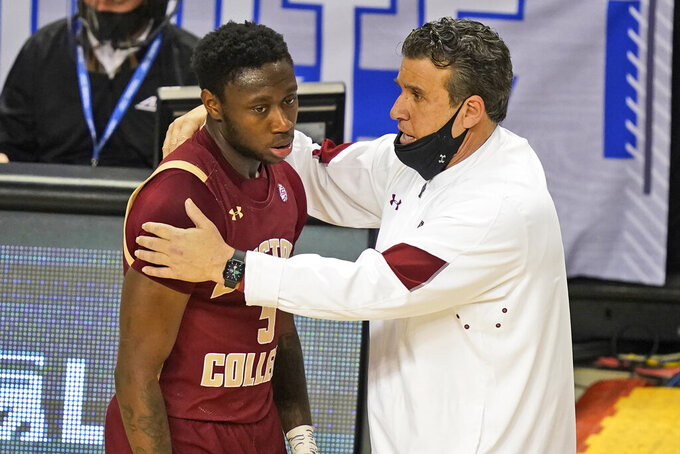 Boston head coach Scott Spinelli, right, talks with Boston guard Jay Heath (5) during the second half of an NCAA college basketball game in the first round of the Atlantic Coast Conference tournament in Greensboro, N.C., Tuesday, March 9, 2021. (AP Photo/Gerry Broome)

BOSTON (AP) — Boston College hired Earl Grant as its basketball coach on Monday, bringing in the man who led the College of Charleston to the NCAA Tournament in the hopes he can do the same for the Eagles.

Grant, who had a 127-89 record in seven seasons with the Cougars, replaces Jim Christian, who was fired with three weeks remaining in his seventh season. BC hasn't been to the NCAA Tournament since 2009.

“My family and I are really excited about the opportunity to start a new journey,” Grant said. “I look forward to representing such a prestigious academic institution, to coach in the top basketball conference in America, and do it in one of the best cities in the world.”

Under Grant, Charleston won the Colonial Athletic Association regular-season and tournament championship in 2018 for its first NCAA appearance in almost two decades. The school was one of 21 Division I programs with players selected in each of the past two NBA drafts.

Grant took over the Cougars in 2014, a year after they left the Southern Conference and went 14-18 (6-10 CAA). They won nine games his first season, 17 in his second and 25 in his third — the first of three consecutive 20-win seasons.

The news release announcing his hiring also noted that the academic progress rate at Charleston for 2018-19 was in the top 10% of men’s basketball programs nationally — a first for the school. Grant was a finalist for the 2019 Skip Prosser Man of the Year Award, given to a coach who achieves success on the basketball court and displays moral integrity off of it.

“We set out to find a leader of young men, someone who shares our vision and our values, who could lead our program to championships while ensuring a world-class student-athlete experience and education for our players,” BC athletic director Pat Kraft said. “Earl is exactly what we were looking for and what our basketball program needs at this moment and I am confident he will have tremendous success in Chestnut Hill, on the court and off.”

A Charleston, South Carolina, native, Grant played for Georgia College before embarking on a coaching career that took him to The Citadel, Winthrop, Wichita State and Clemson. At Wichita State from 2007-10, he was on the staff of Greg Marshall when the Shockers went from 11-20 to 25-10 in three seasons.

Boston College has finished above .500 in the Atlantic Coast Conference just four times since leaving the Big East in 2005, the last in 2010-11.

Christian went 78-132 (26-94 ACC) in seven years in Chestnut Hill. He was fired last month with a 3-13 record (1-9 ACC); with assistant Scott Spinelli as interim coach, the Eagles won one of their final four games.