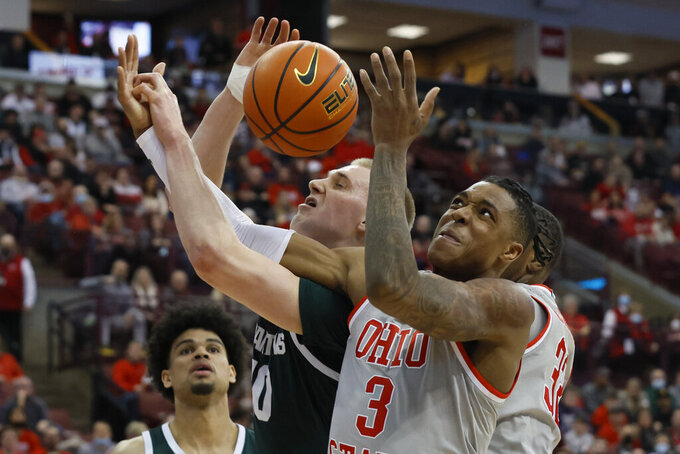 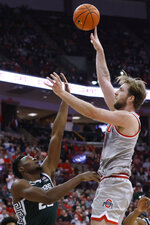 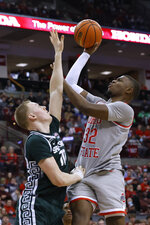 Branham scored 15 points in the second half and finished 9 for 16 from the floor.

“We had to have some internal conversations about things we needed to do better,” Ohio State coach Chris Holtmann said. “I’ve not really doubted this group to respond this year.”

Ohio State closed the opening period with a 16-8 run for a 43-33 lead at halftime. The Spartans never got closer than 10 points the rest of the way.

The Spartans shot 45% from the field overall and 50% from 3-point range. They outrebounded the Buckeyes 30-26.

Brunk made his third start of the season and first since Nov. 24, 2021. He finished 7 of 10 from the field and finished well above his season average of 1.3 points.

“I feel confident getting the ball on the block,” Brunk said. “It’s something I’ve done my whole life playing with my back to the basket and playing confident.”

CONNECTED ON BOTH ENDS

The Buckeyes forced the Spartans into 13 turnovers, which is the most for Michigan State in six games.

Ohio State also only surrendered four second-chance points despite getting beat 10-5 on the offensive glass. The Buckeyes shot above 50% in both halves, never trailing in the game.

“I just feel like everybody was playing with confidence,” Liddell said. “That was awesome to see.”

Wheeler finished the game 5 of 11 from the field, taking his most shot attempts in 14 games.

He knocked down all four 3-pointers in the first half and made both of his free throws late in the second half.

“He took a couple in transition maybe that were a little bit surprising to me,” Holtmann said. “He was in a good rhythm”

Michigan State: The Spartans suffered their third loss to a ranked opponent in five games, and the seventh in nine games overall.

Ohio State: After consecutive losses in which they shot less than 38.6% from the field, the Buckeyes bounced back to shoot 54.7%, their best in 12 games.

“Sometimes when you press, you really try hard to win and you force the issue. It doesn’t end up working out,” Holtmann said. “We made some open shots here today.”