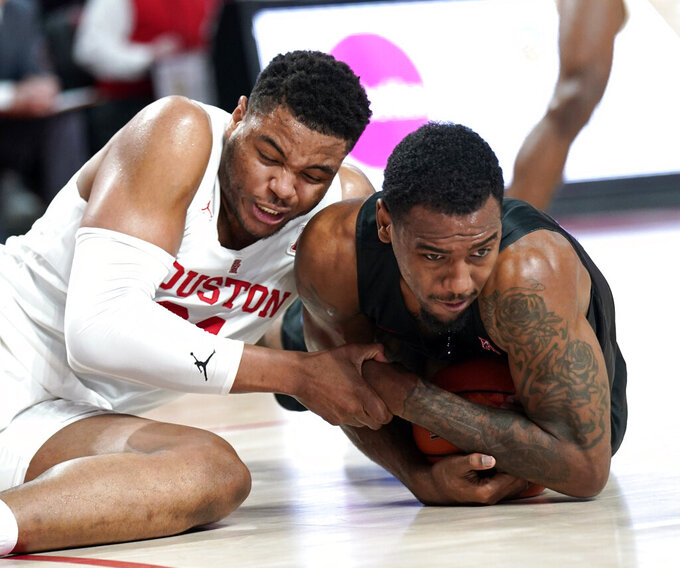 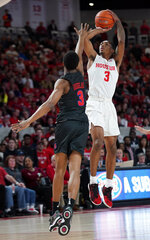 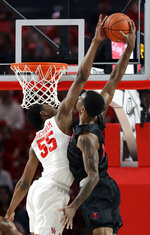 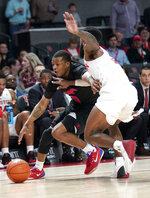 HOUSTON (AP) — Houston rebounded from its second loss of the season to wrap up at least a share of the American Athletic Conference regular-season title and the No. 1 seed in the conference tournament.

"We're 15-2 and conference champions," Houston coach Kelvin Sampson said. "I have only been here five years, so I don't have the perspective of 27 years."

Davis said the players were told midway through the first half about UCF's win, which gave Houston extra motivation to win.

"It means everything," Davis said. "We worked very hard and have been so determined. We fought every game. We worked hard in practice every day. It's a testament to how hard we've worked and how bad we really want this."

Brooks made six 3-pointers, Davis had four and the Cougars shot 53 percent overall, going 12 of 29 from behind the arc. Breaon Brady added 16 points, Galen Robinson Jr. had 11, and Houston turned 15 SMU turnovers into 22 points.

"This means a lot because people doubted us," Robinson said. "We've always been players who play with chips on our shoulders. When our backs are against the wall and you doubt us, that's when we play our best."

The 28 regular-season tied the 1967-68 team, which included Hall of Famer Elvin Hayes, for most in school history.

"This doesn't happen because you got good players, it just doesn't," Sampson said. "If that was the case then the most talented team would win the league every year. We came here to build a program, and we knew it would be hard, but we were willing to work. We rolled up our sleeves and worked."

"That was a great team, and you're not going to keep them down all night," SMU coach Tim Jankovich said. "As hard as we played, we did have a hard time stopping them. They were just on fire."

Houston used a 21-6 run over an eight-minute span to open up a 27-16 lead. Brooks hit three consecutive 3-pointers to lead the run.

Houston led 46-37 at the half behind 12 points each from Brady and Brooks.

After SMU opened the second half with Jarrey Foster's 3-pointer to cut the lead to six, Houston responded with an 11-0 run to up the lead to 57-40 with 17 minutes remaining on seven straight points by Davis. SMU got no closer than nine the rest of the way.

"We had to stop the silly turnovers, play our basketball and grit out the win," Davis said. "We were making shots. We just had to keep getting stops, keep playing our ball."

Houston: The Cougars out-hustled SMU throughout, holding a 35-25 edge in rebounds and outscoring the Mustangs, 24-8 in second chance points and 38-20 in points in the paint. Houston's bench outscored the Mustangs' bench 37-1.

"We knew the timing was very poor to come in here. Coming off their loss, they needed this win desperately, and it's Senior night. Probably couldn't have had a worse time to come here." - Jankovich on playing Houston after the Cougars' loss on Saturday.

SMU: At South Florida on Sunday.

Houston: At Cincinnati on Sunday.