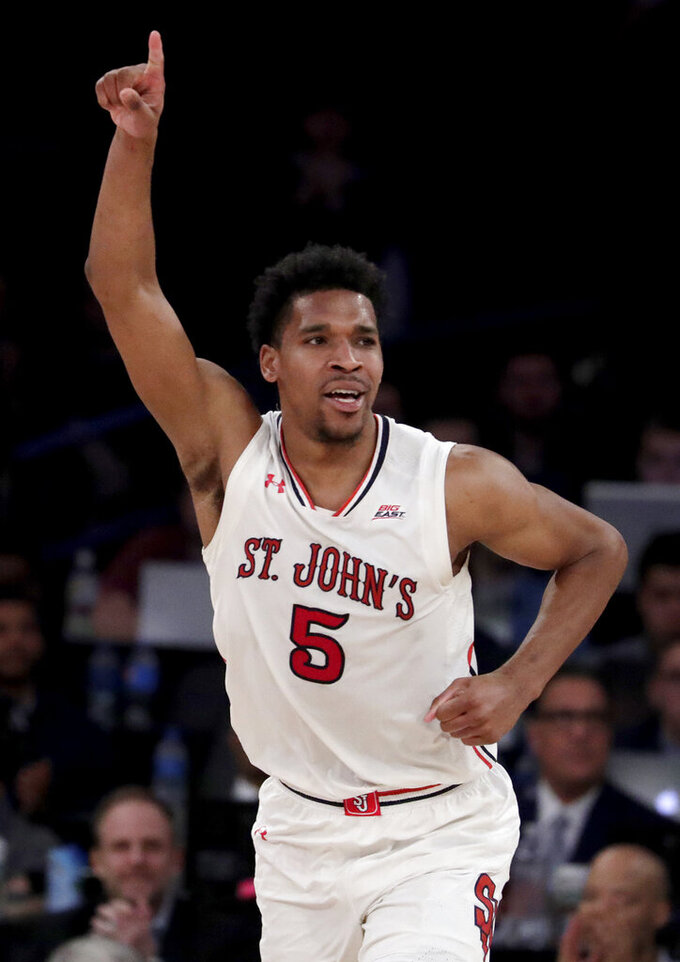 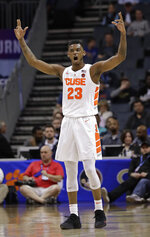 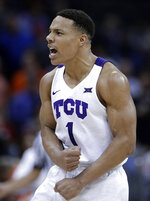 Bane's corner 3-pointer in the closing seconds pushed TCU over Oklahoma State 73-70 in the Big 12 Tournament . The Horned Frogs (20-12) were one of a few bubble teams that improved their resume with much-needed wins on Wednesday.

TCU coach Jamie Dixon said the win put the Horned Frogs "in a good spot" when asked if he thought his program was going to the NCAA Tournament.

"Twenty wins in the Big 12, toughest conference in the country and we played a tough nonconference, so I would think so," Dixon said. "But you never know what plays out in the other things."

Syracuse, St. John's and NC State all helped their profile with wins in their respective conference tournaments. Syracuse beat Pittsburgh 73-59 for its 20th win of the season, St. John's beat DePaul 82-74 and NC State knocked off another bubble team Clemson 59-58.

All those wins aren't good news for several mid-majors that hope to earn at-large bids into the 68-team field. UNC Greensboro, Belmont and Lipscomb are among several teams that almost certainly would have rather seen Bane's 3-pointer bounce off the iron.

TCU - which blew a 21-point lead in the second half against Oklahoma State before Bane's heroics - will feel even better about its Big Dance chances if it can beat No. 15 Kansas State on Thursday.

Here's a look at the rising and falling fortunes of some bubble teams, as well as upcoming big games:

NC State: The Wolfpack's win over Clemson was much-needed for the resume, which now includes 22 wins. An upset over No. 2 Virginia on Thursday would be even better.

TCU: The Horned Frogs can add another marquee win by knocking off nationally-ranked Kansas State on Thursday.

St. John's: The Red Storm (21-11) needed that win over DePaul after closing the regular season with three straight losses.

Clemson: The loss to NC State hurts and now there's no opportunity for the Tigers to improve their resume. Clemson (19-13) has a NET ranking that's still hovering in the mid-30s so there's a chance the Tigers get in the field.

Lipscomb: The Bisons (25-7) are among several mid-major programs that can't improve their win total and are watching while programs like NC State and TCU rise.

Oklahoma: It's a stretch to say the Sooners' hopes are fading considering most mock brackets don't have them in much trouble, but Wednesday's 72-71 loss to West Virginia was not optimal. Oklahoma now has a 19-13 record, including a 7-12 mark against teams in the Big 12.

Indiana vs. Ohio State: Both the Hoosiers (17-14, 8-12 Big Ten) and the Buckeyes (18-13, 8-12) are in an equally desperate situation to win this game. Indiana's got the recent momentum, winning four straight to end the regular season.

Arkansas vs. Florida: The Gators (17-14, 9-9 Southeastern Conference) lost three straight to end the regular season to fall squarely on the bubble. A win against Arkansas would certainly help. The Razorbacks (17-14, 8-10) have ultra-slim at-large hopes of their own, but it would likely take a deep run in the SEC Tournament and some bubble luck to end up in the bracket.

Creighton vs. Xavier: The Bluejays and Musketeers both appear to be on the bubble, even though Creighton (18-13, 9-9 Big East) might have a slightly stronger case at the moment. Regardless, neither team can afford to lose this one. Xavier (17-14, 9-9) has won six of its past seven games just to get into the conversation.

Alabama vs. Ole Miss: The Rebels (20-11, 10-8 SEC) are in pretty good shape to make the bracket no matter what happens this week. Alabama has much more to worry about. The Tide (17-14, 8-10) really need to beat Ole Miss and maybe win another game or two.

Texas vs. Kansas: Texas (16-15, 8-10 Big 12) have one of the bubble's stranger profiles thanks to a win-loss record that's just above .500. The Longhorns might be able to survive a loss to Kansas on Thursday and still get in the bracket, but it won't be easy.