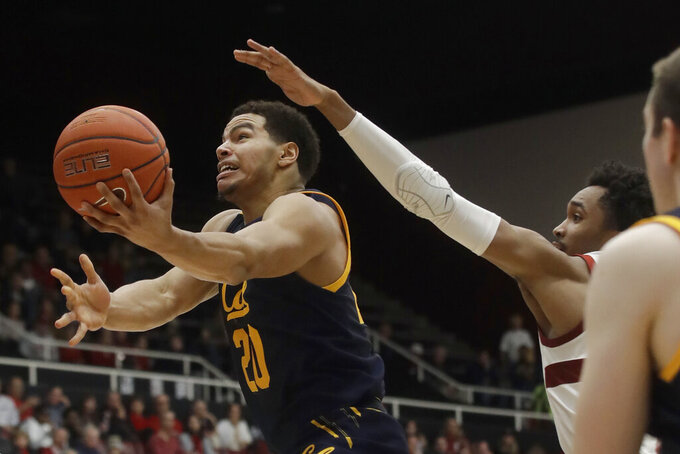 FILE - In this Jan. 2, 2020, file photo, California guard Matt Bradley (20) shoots in front of Stanford guard Bryce Wills during the second half of an NCAA college basketball game in Stanford, Calif. Bradley will be counting on some scoring help from his California teammates as the Golden Bears look to build on being one year more experienced. (AP Photo/Jeff Chiu, File)

BERKELEY, Calif. (AP) — Any progress Mark Fox had planned to make entering his second season coaching California never quite worked out as he had hoped.

The Golden Bears missed more than a week of crucial preparation time because of a positive coronavirus test that halted practice. They're back at it now, furiously playing catch up as Fox also tries to finalize a competitive nonconference schedule.

Most second-year coaches expect significant strides considering their players have been in the program for one season already.

“I would have anticipated that, though the entire country lost the spring. We lost the summer,” Fox said. “Everybody had the fall but our fall essentially was outdoors and in small groups so I felt like we were behind without question when practice began, then we had the shutdown. I would like to think that, hey, because it's the second year, we've got a couple guys back and everything else, but there's just been such massive disruption that I don't feel like I should feel going into year two.”

“I think that everyone on the team, we expect to make the strides that Coach Fox is talking about,” senior forward Grant Anticevich said. “While we were away from each other everyone was working hard individually. When we came together, I think for the most part we managed to get everything done that we had to get done. Even given the circumstances I don’t think it set us back that much.”

Matt Bradley will be counting on some scoring help from his Cal teammates.

Bradley, a junior guard, was the only player to score in double figures last season, averaging 17.5 points per game while making 66 3-pointers to go with 4.9 rebounds and 1.5 assists.

Anticevich and Andre Kelly will be key contributors.

“It’s not going to just be one designated guy, it’s going to have to be somewhat by committee,” Fox said.

The Cal players want to show Fox how far they've come since he took over last season.

Fox, who had a successful run at Nevada before landing in Berkeley, earned his 300th career win in the Bears' Pac-12 tournament victory against rival Stanford. He is 300-194 entering the season.

“I still think we can achieve everything that we planned on achieving,” Anticevich said. “It's the second year under Coach Fox so there's a lot of returners and it makes it easier for the new guys coming in having guys who have been under the system for a year."

Cal finished 1-10 away from Haas Pavilion, where the team was 12-5. Included in those road losses were defeats at West Coast Conference schools Santa Clara and San Francisco.

Fox said improving on the road will come down to playing 40 minutes of disciplined basketball.

“You’re not going to win away from home until you become more complete as a basketball team. On the road those things catch up to you,” he said.

Anticevich led Cal with 5.6 rebounds per game and the Bears were narrowly outdone on the boards, 33.1 to 32.7

“I think experience is definitely a big thing,” Anticevich said.

Fox envisions more from his returning front-line players because “one or two rebounds could be the difference in a game.”

The positive test for COVID-19 interrupted the Bears for more than a week before they returned to the floor Nov. 1. They only had six practices before the pause.

Cal was cleared to resume practice following an investigation and contact tracing — and no others received positive COVID-19 results, the school said. The player who tested positive, who was not identified publicly, is asymptomatic in isolation and will return once he completes his quarantine period and further medical evaluations are complete.

“It was hard but we’re excited to all be back together getting ready for the season, all practicing together as a team. It’s a really good feeling,” Anticevich said. “... I definitely think it's going to make us mentally tougher and it obviously brings us together more. I think everyone appreciates how lucky we are to play the game and play with each other and we appreciate being able to be on the court together after such a long time away.”

Cal opens the conference slate at home against Arizona State on Dec. 3, then plays at UCLA on Dec. 6. Fox hopes to have the nonconference schedule complete soon.

Cal lost six games just with the change of starting dates, then a seventh last week.