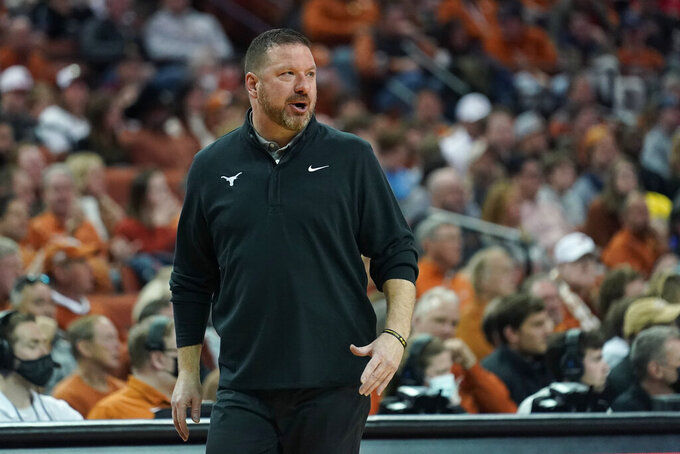 Texas head coach Chris Beard talks to his players during the first half of an NCAA college basketball game against the Iowa State, Saturday, Feb. 5, 2022, in Austin, Texas. (AP Photo/Eric Gay)

AUSTIN, Texas (AP) — The Texas Longhorns were mired in offensive miscues and misfires when Marcus Carr delivered the pass and a few big shots that changed everything.

After a quiet start against Iowa State, Carr made a lob pass to set up a Christian Bishop dunk and made a 3-pointer at the end of the first half to snatch the lead before No. 23 Texas pulled away for a comfortable 63-41 win over the No. 20 Cyclones on Saturday.

Once Texas had the lead and momentum, Carr's 3-pointer to open the second half started a long-distance shooting barrage that buried Iowa State.

“When Marcus is aggressive, confident and loose, he’s probably one of the best players in the country,” Texas guard Andrew Jones said. "We all feed off his energy.

Carr and Jones each scored 14 points for the Longhorns (17-6, 6-4 Big 12). Carr added a season-high eight assists, and Jones made three of Texas' six 3-pointers in the opening minutes of the second half.

The game wasn't so smooth for Texas in the early going. Not until Carr, who had a pair of early turnovers and just one basket in the first 19 minutes, found his touch as a passer and scorer.

“He pressed early, then he just calmed down. Sometimes, lesser players calming down means cautious. To me, he sped it up and played more solid,” Texas coach Chris Beard said.

Iowa State had been keeping the Longhorns off-balance offensively.

“The end of the first half was to me, certainly the turning point in the game," Iowa State coach T.J. Otzelberger said. “When we had it 23-20, they weren’t feeling great ... It certainly got them going. Certainly with Carr, he’s a dynamic scorer.”

And Carr was just getting started.

His 3-pointer to open the second further loosened up the Longhorns. Snappy ball movement had Iowa State defenders scrambling to cover shooters, and Texas quickly got two more 3-pointers from Courtney Ramey and Jones to open up an 11-point lead that was never challenged.

Ramey added 10 points for the Longhorns, who also played shut-down defense in holding the Cyclones to just 29% shooting.

Izaiah Brockington scored 12 for Iowa State (16-7, 3-7). But Brockington, who had averaged nearly 22 points the previous three games, made just one basket in the second half and open shots didn’t go in.

“He got aggressive early and he got hot. We made some adjustments and shut him down," Jones said. “If he had gone for 22 (points), it would have been a hard game to win.”

Texas still had to hang on, much like a week earlier when the Longhorns nearly squandered a 17-point lead at home against Tennessee before winning on free throw in the final seconds.

There was no letup this time. Carr's short jumper with minutes left put Texas ahead 53-36 with just over 6 minutes left and the Longhorns coasted to the finish.

Iowa State: The Cyclones were very good defensively for long stretches, but turnovers and poor shot choices led them to squander an early lead. Iowa State had its lowest-scoring game of the season and managed just 18 points and six baskets in the second half.

Texas: It's not too early to say Texas needed the win in the roughest part of the Longhorns' schedule. The final eight games of the regular season will include two matchups with No. 10 Kansas and No. 8 Baylor, a road trip to Oklahoma and a home game against No. 14 Texas Tech.

“We guarded, we shared the ball, we played well today,” Beard said. “Today, it probably wouldn’t have mattered who our opponents was. We play like that in the second half, we can pay with anybody in the country.”

Iowa State: The Cyclones play at West Virginia on Tuesday.

Texas: The Longhorns host No. 10 Kansas on Monday.