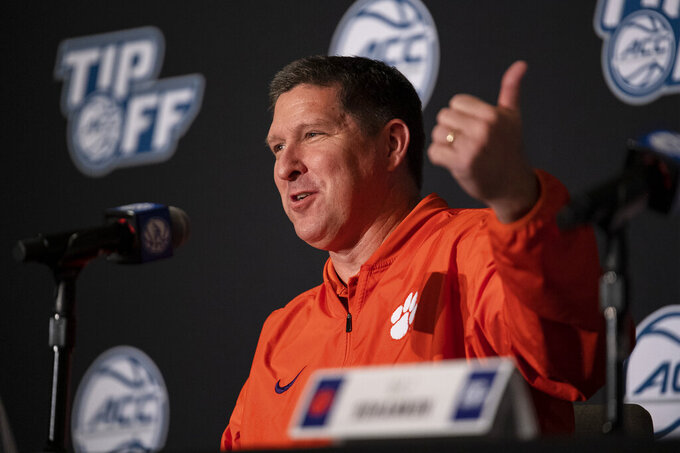 These days, Brownell believes the Tigers have a rising basketball brand that stands strong in the powerhouse Atlantic Coast Conference.

Brownell enters his 12th season at Clemson off the team's second NCAA Tournament appearance in the past four seasons. The Tigers went 16-8 and 10-6 in the ACC, the fourth time Brownell's program has won double-digit conference games. The Tigers had only accomplished that three other times in their first 56 seasons in the league.

“The first five years that I was on the job, it was hard,” Brownell said. “Two of those years, we didn’t have an arena. That’s never easy for players in your program.”

Since its venue renovation that was completed prior to the 2016-17 season, Brownell believes his team had steadily moved forward.

“I think we've done a good job over the last decade of building our brand and improving our program in all areas,” he said.

The Tigers will need to call their depth heading into this season without its leading scorer and rebounder from last season in Aamir Simms, a second-team all-ACC player last year who won the Skip Prosser Award given the league's top scholar athlete.

Brownell said he'll lean heavily on a pair of experienced transfer players new to Clemson in Naz Bohananon of Youngstown State and David Collins of USF.

Collins, at 6-4, was USF's leading scorer last season at 12.5 points a game. He also led the Bulls in assists.

When Bohannon researched Clemson, he found the program he wanted. “I could respect the culture that (Brownell) has in place and the staples the program stood for,” he said.

Some other things to watch in Clemson's men's basketball:

Brownell received a new contract earlier this month that links him to the school through the 2025-26 season. He also got a $300,000 raise for this season. Brownell already is the school's winningest coach with 201 victories with the Tigers.

Trap and Newman have been significant parts of Clemson's backcourt the past few seasons. Their departures, Brownell said, means juniors Al-Amir Dawes and Nick Honor will have to play even bigger roles than they have. Dawes started 15 games last season, averaging 9 points a game. Honor made 10 starts and finished with 8.1 points a game.

P.J. Hall was the top-rated high school player in the state of South Carolina when he joined the Tigers last season. With Simms gone, Brownell said the 6-10 sophomore will play center full time after coming off the bench last season. Hall's biggest moment last year was a hook shot with 10 seconds left in overtime to secure Clemson's 74-70 win over North Carolina State last year.

Brownell added longtime college basketball coach Jeff Reynolds to his staff as a special assistant to the head coach. The two had known each other for some time and Brownell wanted to tap into Reynolds knowledge of the region and the ACC. Reynolds was head coach at Air Force and Wingate. He also served as director of scouting and game management at Virginia Tech.

Clemson opens at home against Presbyterian on Nov. 9. It plays in the Charleston Classic against Temple and also features Marquette, Mississippi and West Virginia. The Tigers go to Rutgers in the ACC/Big Ten Challenge. The ACC season starts Dec. 4 against Miami, one of three league games Clemson plays before New Year's Day.