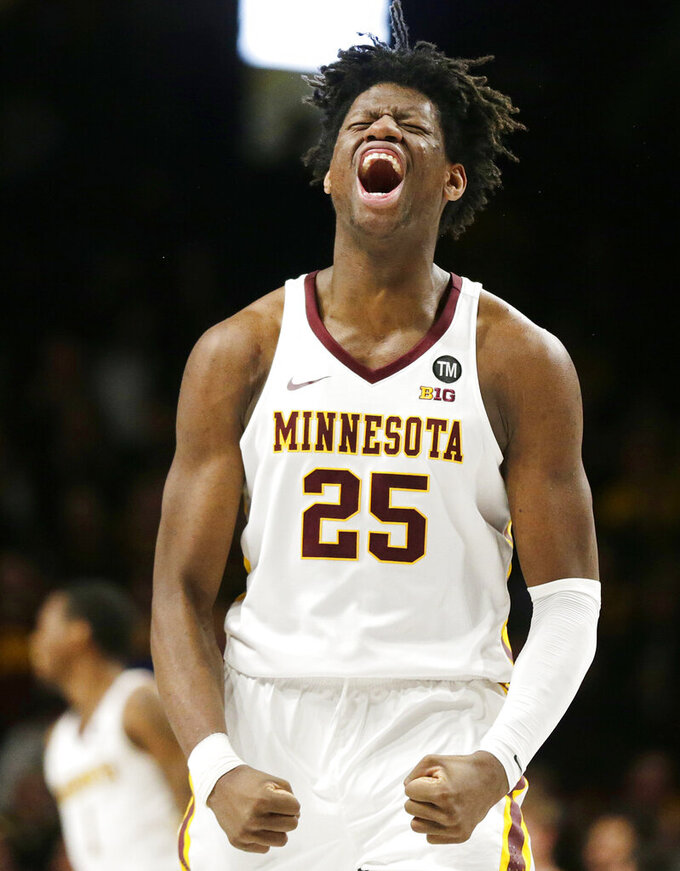 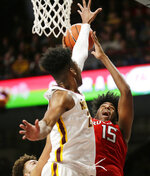 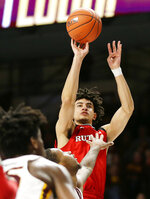 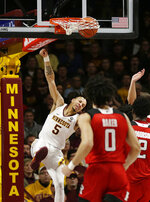 MINNEAPOLIS (AP) — Minnesota's defense sparked its fast-break offense in time for the Gophers to pull away from Rutgers on Saturday.

Myles Johnson scored a career-high 13 and Geo Baker also scored 13 points for the Scarlet Knights (8-7, 1-4), who were playing without their leading scorer and rebounder, Eugene Omoruyi, who was out with a knee injury.

"We're down a lot of players, but no excuse — you've still got to take away the strength of another team," Rutgers coach Steve Pikiell said. "Their two biggest strengths were getting to the free throw line and transition, and we didn't do a great job taking away either."

Rutgers pulled to within five at multiple points in the second half but the Gophers finally pulled away with a 14-1 run that started when backup guard Isaiah Washington banked in a 3-pointer.

Minnesota's defense then set up a number of fast-break opportunities that the Gophers cashed in on the other end. McBrayer rebounded a Rutgers miss and sprung Coffey for a coast-to-coast dunk. On the next possession, Murphy and center Daniel Oturu each blocked shots before Murphy fed the ball ahead to Washington for a transition layup.

Finally, on the next possession, after Murphy blocked another shot, Coffey grabbed the rebound and took it straight to the hoop on the other end, drawing a foul and making both free throws.

Minnesota coach Richard Pitino said that stretch typifies how he wants his team to play.

"The key is always to defend, rebound, and then run," Pitino said. "That's always been our mentality, and the better we get defensively, it allows us to get out on the break."

After scoring just eight points in the first half, Coffey exploded for nine in the first six minutes of the second half. He finished the day 10-for-14 from the field — including 9-for-10 from inside the 3-point line — and made 8 of 10 free throws. Coffey is averaging 23.4 points in Minnesota's five conference games this year.

"Amir's playing like one of the better players in the league right now," Pitino said. "I always expected this year to be a breakout year for him and he's certainly making it that."

But Rutgers stayed in the game thanks in large part to the play of their big men. Johnson, a 6-foot-10 freshman, and 6-9 Shaq Carter went toe-to-toe with Murphy, the nation's second-leading rebounder at 12.0 boards per game. Johnson pulled down eight rebounds while Carter added eight points and six boards, part of the 40 points Rutgers scored in the paint.

"We're definitely down a couple guys," Johnson said. "But the next man up is going to be ready to step up, and I'm trying to do my best to step up."

In the end, it wasn't enough to slow Minnesota in the second half when the Golden Gophers took control on both ends of the court.

"No matter what happened down the stretch, even if they made a couple of shots we were able to answer back and get a few stops and get a few rebounds we really needed," Murphy said.

Rugters: The Scarlet Knights had a tough task in trying to build off the momentum of their upset victory over Ohio State on Wednesday. Omoruyi dislocated his left kneecap in that game, and his productivity and veteran presence were missed on Saturday. To make matters worse, the Scarlet Knights also lost freshman guard Caleb McConnell to an apparent leg injury in the first half.

Minnesota: The Gophers were looking to improve on their dismal showing at the line in their loss to Maryland on Tuesday, when they made just 9 of 23 free throws. On Saturday they went 20-for-25 to at least temporarily put those concerns to rest. Meanwhile, Murphy passed Draymond Green to become the fourth-leading rebounder in Big Ten history.

Rutgers: at Purdue on Tuesday

Minnesota: at Illinois on Wednesday