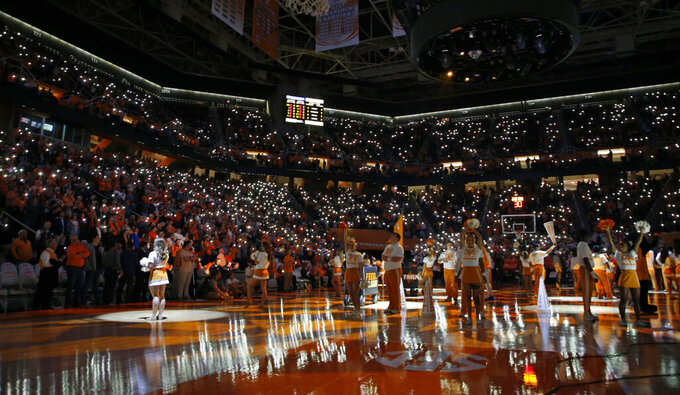 FILE - In this Feb. 19, 2019 file photo, fans hold up their cell phones with the flashlight on as music plays before an NCAA college basketball game between Tennessee and Vanderbilt in Knoxville, Tenn. College basketball teams are trying to get fans to keep coming to games in the age of smartphones by making those phones an integral part of the experience. That’s evident every time cellphones in the stands light up arenas across the country during pregame lineup introductions. (AP photo/Wade Payne, File)

KNOXVILLE, Tenn. (AP) — College basketball teams are trying to get fans to keep coming to games in the age of smartphones by making those phones an integral part of the experience.

That's evident every time cellphones in the stands light up arenas across the country during pregame lineup introductions.

Over 20 schools subscribe to a service enabling fans to have their phones light up in sync with music playing during pregame festivities. The program, organized by a company called Cue Audio, adds glitz to lineup introductions at various arenas from Oregon to Georgia.

"The light show's pretty cool," Tennessee guard Admiral Schofield said. "Especially when we have sold-out games, I think for the opposing team, you really see how many people are in the building, just by the cellphones. It brings a different intensity to the game."

The success of the Cue Audio project shows the variety of ways colleges are trying to assure fans keep coming to games when HD television makes it tempting to stay home instead.

Football Bowl Subdivision attendance has dipped every season from 2014-17 (2018 figures haven't been released yet). The same concerns exist in basketball.

"One of the challenges we have nowadays with getting fans to invest in purchasing tickets and actually using them is to try to create moments you can't necessarily get at home from your couch or wherever you are watching on your phone," Virginia Tech assistant athletic director for marketing and promotions Lauren Belisle said. "Anything we can do to make fans feel when they're in the building that they're impacting the game and part of the whole experience is big for us."

Arizona State has added a disc jockey. North Carolina installed four new video boards at a cost of just over $5 million. Nebraska has a contest in which a blindfolded student gets on his or her knees to search for a pile of cash on the court.

North Carolina assistant athletic director for marketing Michael Beale says the aim is to make sure spectators experience something they couldn't see just as easily on television.

"What we're doing now, we don't put our team entrance video out on social media or out for people to see," Beale said. "If you want to see the entrance video, you need to be in the Smith Center."

And it's those pregame entrances that exemplify the steps being taken to get fans into their seats as early as possible.

Cue Audio co-founder Ira Akers says the company's idea of lighting up arenas with cellphones started out with a minor league hockey team in Nebraska. They eventually started marketing it to colleges.

Akers declined to offer pricing information, but Tennessee associate athletic director Jimmy Delaney said the school got a season pass for its men's and women's basketball programs at a cost of close to $15,000. Tennessee, like most schools, found a corporate sponsor to offset all or most of the costs.

Delaney said Tennessee officials were looking at ways to upgrade their pregame experience when they saw how spectators at a Taylor Swift concert got wristbands that lit up in sync to the music. They looked online for additional ideas and discovered what other schools were doing with Cue Audio's service.

"Wristbands are really cool, but we'd have to pass them out and get them back and all that," Delaney said. "What's a better way? Cellphones."

Early adopters of the program included North Carolina, Marquette, Purdue, Nebraska and Wisconsin. Tennessee came aboard with plenty of other schools this year, as the number of colleges subscribing to the service nearly doubled.

That's raised some concern about whether the novelty of these pregame light shows will wear off. In the Big Ten alone, Cue Audio subscribers include Michigan State, Minnesota, Nebraska, Ohio State and Purdue.

"It's, in my opinion, kind of lost its 'wow' factor because so many people use it now," said Michaela Patt, Purdue's director of content, strategy and innovation.

Many schools also have capitalized on other services offered by Cue Audio. That includes participating in basketball trivia contests at halftime or having fans take selfies that appear on the video board.

"It's all about capturing the fans' attention and keeping them engaged in the game when what they came for is not going on," Beale said.

Other teams have discovered more organic ways of attracting fans.

Tennessee's players added some flair to the end of their pregame warmups this season by having one player dunk while teammates jumped in unison, a stunt nicknamed "One Fly, We All Fly."

After slow-motion versions of this stunt started circulating on social media, the stunt went viral with numerous high school and college teams and even the NBA's Miami Heat trying out their own versions.

Tennessee has won 25 consecutive home games, and its average attendance of 18,945 is up 16.9 percent over last season and 38.9 percent over 2016-17. Delaney says fans email and call before every game asking when they must arrive to see the pregame dunk.

"No doubt," Tennessee forward Grant Williams said after a recent victory over Vanderbilt. "I saw it tonight. I was like, 'Wow, there are a lot of people here,' when we first got here. ... And I think it was like an hour-and-a-half before the game."