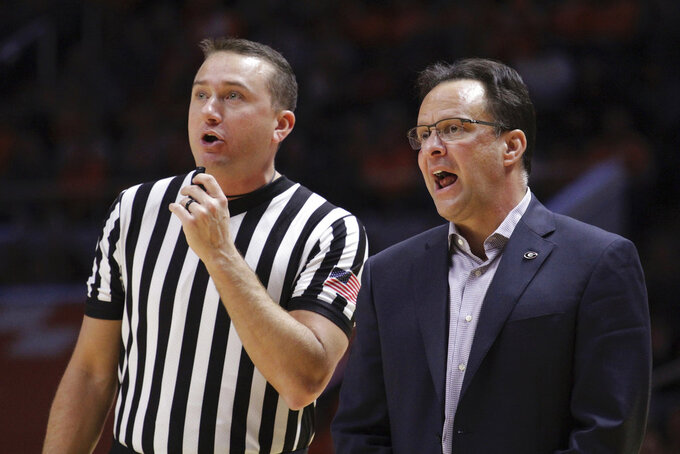 FILE - In this Jan. 5, 2019, file photo, Georgia head coach Tom Crean speaks with an official in the second half of an NCAA college basketball game against Tennessee, in Knoxville, Tenn. Crean received a jolting welcome to the SEC in Georgia's 90-56 loss at No. 3 Tennessee, reminding the first-year coach his team has "a long way" to go entering Wednesday night's game against Vanderbilt. (AP Photo/Shawn Millsaps, File)

ATHENS, Ga. (AP) — Tom Crean's rebuilding job at Georgia may be more difficult than he first thought following the reality check the Bulldogs were handed in the first-year coach's Southeastern Conference debut.

Hired to make Georgia's program relevant on a national level, the Bulldogs suffered their most lopsided loss in 60 years in Crean's first conference game.

Crean was careful to avoid panic following Saturday's 96-50 loss at No. 3 Tennessee . But he didn't try to mask his concern on Tuesday about his new team's lack of toughness.

A lopsided score is bad. A lack of fight is worse.

"It was more how we played," Crean said. "That was what I focused on. We didn't make them have to earn a whole lot. ... We were never tough on the ball in that game. And we didn't play smart in the post."

Crean said there won't be "wholesale change or anything like that" in Wednesday night's game against Vanderbilt. But he's not standing pat.

A bit of on-court leadership would help.

"You've got to have somebody step up ... and help bring confidence to the team," Crean said. "It can't just be coach-driven. ... That remains to be seen who that's going to be. We had nobody who did that the other day."

With that challenge issued to players, the pressure is on Georgia (8-5, 0-1) to even its SEC mark against the Commodores (9-4, 0-1). Tougher games are ahead for the first-year coach . The Bulldogs play at No. 11 Auburn on Saturday.

Vanderbilt is coming off an 81-71 loss to Mississippi .

Georgia's loss was its worst ever to Tennessee and most lopsided defeat overall since Jan. 29, 1959, when Kentucky beat the Bulldogs 108-55.

It was a rugged introduction to the league for Crean, the former Indiana and Marquette coach.

Crean said he "vented on the front of the bus to the screen" while watching video of the game on the ride home from Tennessee. He said he didn't take it out on the team.

"The worst thing you can let happen is you get mad at your team ... and they get nothing out of it," he said.

Forward Derek Ogbeide said Crean's response to the players was "the same reaction he gives toward everything. He wants to continue to get better, he wants us to continue to focus and lock in and control the slippage we had."

Crean said he quickly turned the focus to Vanderbilt. He wants the Bulldogs to have smarter play inside and tougher, faster-paced action overall.

"It changes the entire dynamic of the team," Crean said.

Even worse, Claxton had four fouls in the first half. The 6-foot-11 Claxton, a sophomore, had been playing like an emerging star for Georgia, averaging a double-double. He had only six points with five rebounds in the loss.

"That should never happen," Claxton said of the four first-half fouls. "That's all a mental thing."

Crean, who said he is confident the shooting will improve, wants Georgia to push the tempo against Vanderbilt, which likes to play fast.

"Of all the things that went wrong Saturday that we didn't do, and there were a lot of them, we never played fast," he said. "We never played with any pace. We never probed and attacked and got the game in any time of movement or rotation that we need to do."