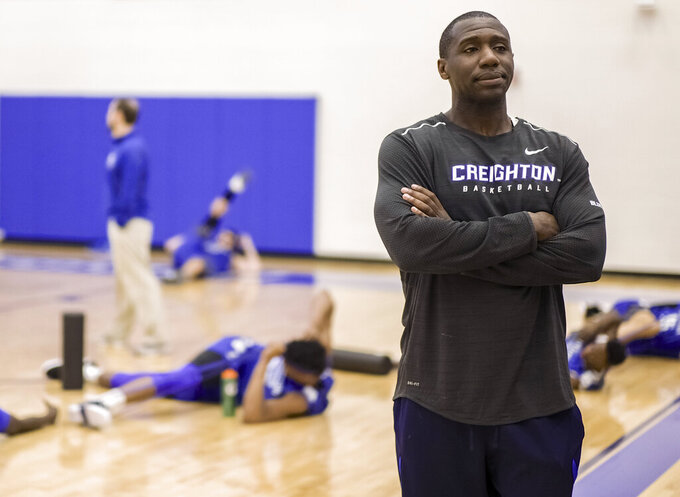 FILE - In this March 17, 2017, file photo, Creighton assistant coach Preston Murphy, right, stands as players warm up during practice in Omaha, Neb. Creighton has placed Murphy on administrative leave after he was implicated in a sting in which he allegedly took a $6,000 from an aspiring sports agent to send clients his way. Athletic director Bruce Rasmussen said in a statement Friday night, March 8, 2019, that Murphy would be on leave pending an internal review. (AP Photo/Nati Harnik, File)

OMAHA, Neb. (AP) — Assistant coaches Preston Murphy of Creighton and Corey Barker of TCU have been placed on administrative leave by their schools after each was accused of taking a $6,000 bribe from an aspiring sports agent to send prospective clients his way.

Yahoo Sports reported Thursday that, in a federal court filing in the Southern District of New York, Christopher Dawkins allegedly paid $6,000 to an assistant from schools in Nebraska and Texas in July 2017. Yahoo, citing anonymous sources, identified the assistants as Murphy and Barker.

Murphy and Barker are not expected to be charged, Yahoo reported.

Dawkins, along with former Adidas executive James Gatto, former Adidas consultant Merl Code were convicted in October of conspiracy to commit wire fraud for funneling illegal payments to families of recruits to Louisville, Kansas and North Carolina State. Each was sentenced Monday to six months in prison.

According to the court papers filed Thursday, Dawkins paid bribes to Murphy and Barker during separate meetings in a Las Vegas hotel. An undercover FBI agent was also present.

The assistants were paid "in exchange for agreement to steer certain student-athletes ... to retain Dawkins and the services of Dawkins' company, once those athletes entered the NBA."

Creighton came up in the October corruption trial. Brian Bowen Sr., father of star recruit Brian Bowen Jr., testified that Murphy offered him $100,000 and a "lucrative" job if his son signed with the Bluejays. Bowen signed with Louisville but was suspended when his family was found to have accepted $100,000 to play for the Cardinals.