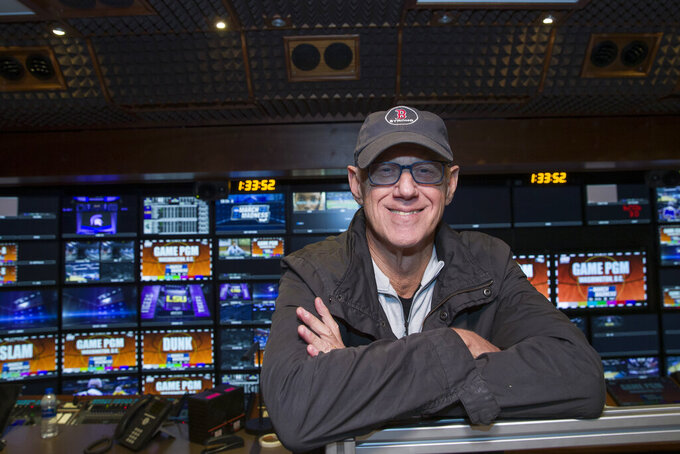 In this Thursday, March 28, 2019 photo, CBS director Bob Fishman poses in the production truck in Washington, D.C. Fishman is preparing to direct his 38th Final Four this week in Minneapolis. If anyone can speak about the growth of the NCAA Tournament on television it is Fishman. (AP Photo/Alex Brandon)

Michigan State's Tom Izzo has the most Final Four experience of any of the coaches in this year's NCAA Tournament finale.

He still doesn't have anything on Bob Fishman.

While Izzo is coaching in his eighth Final Four, Fishman will be in the director's chair for his 37th. He's been the lead director for CBS for the NCAA Tournament since 1982.

"He lives and breathes this tournament," CBS Sports President Sean McManus said. "If you watch his games there is a level of expertise and a level of achievement that is just year in and year out."

When CBS televised its first NCAA Tournament in 1982, less than half the games were on network television. CBS took over covering the entire tournament in 1991 but viewers were at the mercy of the network as to which games they could watch. It wasn't until CBS teamed up with Turner in 2011 that all the games became available on as many as four channels.

Fishman has been the constant throughout. The only Final Four he has missed was in 1990, when he was being treated for bone cancer.

"All of those highlights, all of those, pardon me, shining moments have come through his cameras," said CBS announcer Jim Nantz, who is calling his 29th Final Four. "He's just the Coach K, if you will, of directors."

"We are scrutinized so much more than we were in 1982 due to the expansion of the tournament. There is the temptation to use all of the equipment at our disposal, but you still have to pay attention and focus to what is on the floor," Fishman said. "You could have a million cameras and not the exact angle. It is how you use it."

When Fishman did his first Final Four in New Orleans, CBS had six cameras. He will have at least 22 this weekend in Minneapolis, including a couple of robotic cameras. Fishman said that no matter the number of cameras, the same principles apply as far as capturing the emotions of the games.

The emotion is why Fishman's favorite scene from all his Final Fours was Georgetown coach John Thompson giving a giant hug to Fred Brown late in the 1984 championship game against Houston. It was Brown who had the infamous turnover in the 1982 final against North Carolina where he threw the ball to James Worthy, whom he mistook for teammate Eric Smith.

One of Fishman's signature shots from this year's tournament came at the end of Duke's narrow victory over UCF in the round of 32, when Duke coach Mike Krzyzewski consoled UCF coach and former player Johnny Dawkins.

"I knew that shot at the end of the game would be special so I made sure to be on it. You never want to pull the trigger too early getting off a shot," Fishman said.

One of the more notable Fishman celebration shots was North Carolina State coach Jim Valvano running around looking for someone to hug after the Wolfpack upset Houston. That was a camera in the high left corner of the arena that was supposed to focus on the larger celebration. It ended up being the only camera that found Valvano amid the last-second craziness.

Fishman hopes this weekend's Final Four games will live up to the drama that the previous two weekends have supplied. Fishman is looking for exciting matchups and the right shot to describe it.

"If you start getting too fancy you aren't benefiting the viewer. Coming down to the last two minutes I know which cameras are going to be there for the coaches' reactions and the emotions of winning and losing teams," he said.

NO ZION, NO PROBLEM: Even though Duke and Zion Williamson fell short of the Final Four, McManus is confident ratings will remain strong for the semifinals on Saturday and the championship game on Monday.

CBS and Turner said in a release that coverage through the regional finals is averaging a 6.7 Nielsen household rating, which is tied for the third-highest in 26 years. The NCAA March Madness Live app has seen a 30 percent increase in live streaming.

"Obviously, Zion was one of, if not the biggest story of the college basketball year. It would be great to have him in Minneapolis," McManus said during a conference call Tuesday. "Having said that, I think the momentum that we have going with this tournament will carry. Zion's not going to be there but I think we'll still have an outstanding Final Four."