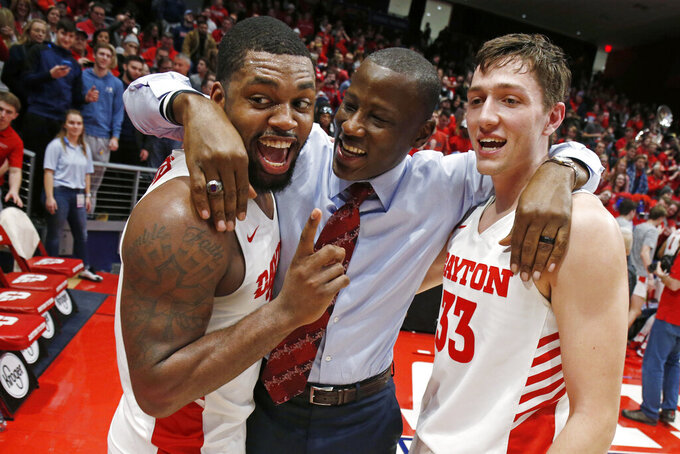 FILE - In this Feb. Feb. 28, 2020, file photo, Dayton coach Anthony Grant, center, gives a hug to players Trey Landers, left, and Ryan Mikesell following the team's 82-67 win over Davidson in an NCAA college basketball game in Dayton, Ohio. The coronavirus outbreak has abruptly roused the University of Dayton from its dream of a basketball season. The 29-2 Flyers were rolling into tournament play on a 20-game winning streak that had lifted spirits in an Ohio city battered in the past year by violent deaths and devastation. The NCAA decision to cancel March Madness ended hopes for the small Roman Catholic school’s first Final Four appearance in 53 years. (AP Photo/Gary Landers, File)

DAYTON, Ohio (AP) — The coronavirus outbreak has abruptly roused the University of Dayton's men's basketball team, and the city it uplifted, from a dream of a season.

The 29-2 Flyers, ranked No. 3 in The Associated Press poll, were rolling into tournament play on a 20-game winning streak that had lifted spirits in a city battered in the past year by a mass shooting and devastating tornadoes.

But the NCAA's decision Thursday to cancel March Madness, one of many such cancellations decided this week as the virus spread, ended hopes for the small Roman Catholic school’s first Final Four appearance since 1967, when an upstart Flyers team lost to Lew Alcindor-led UCLA in the championship game.

Flyers fans shook their heads Friday in the Oregon entertainment district, where the shooting occurred Aug. 4.

“I feel like they got robbed,” said Shawn Mathews, 21, who said he is a cousin of guard Trey Landers.

His father, Norman Mathews, 49, said they had been “looking forward to them going all the way. Wow.”

Canceling, though, was the right decision, with the virus spreading, he said.

“You don’t know what to expect,” the older Mathews said. “I guess we have to wait till next year.”

Landers, a Dayton native, lamented on Twitter: "I wish that all of this was just a dream I could wake up from. ... wish I could play one more game with my brothers.” He added a broken-heart emoji.

“To see it end like this makes my heart hurt, but I am so grateful to get the opportunity to play at UD,” another team leader, Ryan Mikesell, posted on Instagram. “It was an honor to wear ‘Dayton’ across my chest, and it allowed me to create memories that I will cherish for the rest of my life.”

Coach Anthony Grant, who also played at Dayton, taped a thank-you message for “Flyer nation" Thursday night after returning to campus from the Atlantic 10 conference tournament in New York City without playing a game.

“Although we feel like there was more for us to try to accomplish over the course of the season, there’s nothing that can take away what these young men did out on the court throughout the entire season," Grant said. "History was made in a lot of different areas. Just the effort, the love that they showed for each other I think represents this university, this community, in an unbelievable fashion.”

Landers and Mikesell are seniors, and slam-dunking sensation Obi Toppin is likely NBA-bound, leaving Grant with big holes to fill and Dayton likely to begin next season as it did this one: unranked.

Mayor Nan Whaley, a UD alum, said Friday it's stunning that the Flyers' season was ended “not by a loss, but by an international crisis.”

Dayton’s athletic director and basketball head coaches on Friday offered thoughts and prayers to virus victims, along with hopes that the cancellations will help slow its spread.

“This is bigger than basketball,” Grant said.

Both teams won their conferences, and the coaches said it was tough to see them lose what could be a once-in-a-lifetime chance for a national title.

“They were heartbroken,” women’s Coach Shauna Green said. “It broke my heart.”

Neil Sullivan, the athletic director, said that what the team has meant to a town that has gone through as much as Dayton has makes it “extremely tough.”

The NCAA cancellation is also a setback for a struggling economy that annually hosts the tournament's First Four opening games. Whaley, a Democrat, said the impact of that loss will likely be “a drop in the bucket” compared to the financial hits ahead as schools close.

Besides “Go Flyers” messages, there were still banners up in the Oregon district welcoming First Four fans.

“We’re all going to take a hit,” said Gus Stathes, 35, who runs Barrel House bar with his wife.

The team, he said, had been “a sun ray bursting down from the storm” for Dayton.

Now that ray is gone.

While Flyers fans and the community are sad about what might have been, Whaley thinks the team is leaving behind fond memories that will endure.

“No matter what a pandemic did to stop them, it was a special season,” he said. “I think this will go down as a team and a season that will be talked about for years.”