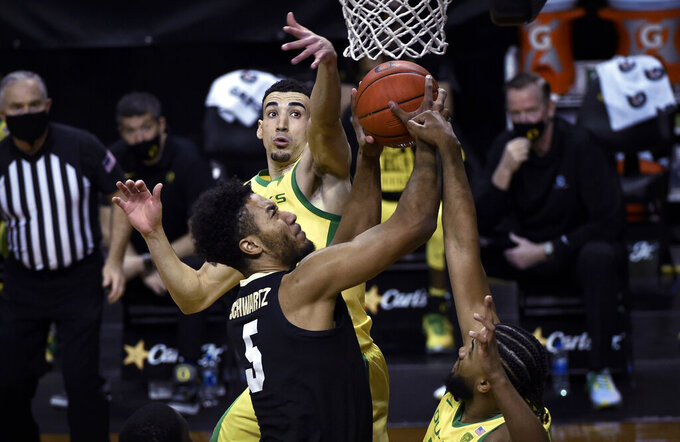 EUGENE, Ore. (AP) — Chris Duarte scored 18 points and Will Richardson scored 5 of his 11 in the last 61 second and Oregon defeated Colorado 60-56 on Thursday night.

In a game where neither team had a double-figure lead, the Ducks took a 55-53 lead with 1:51 to play when 50% free-throw shooter Chandler Lawson made a pair from the line.

After a Colorado miss, Oregon ran the clock down before Richardson made a spinning floater in the lane with 1:01 to go.

Another miss led to two Richardson free throws with 33 seconds to go, making it 59-53 — the Ducks' biggest lead — before D'Shawn Schwartz knocked down a 3 for Colorado. Richardson's free throw at 20.8 seconds wrapped it up.

Schwartz had 16 points and 11 rebounds to lead Colorado (16-7, 10-6), which lost back-to-back games for the first time this season after losing to last-place California on Saturday. The Buffalos, who topped Oregon at home 79-72, have lost six-straight at Oregon.

Colorado never trailed and had a possession with an eight-point lead in a defensive first half, using 10 points from Schwartz to take a 30-25 lead. Shooting was even but the Buffalos had two fewer turnovers (8-6) and three more offensive rebounds (7-4) to get up five more shots, just enough to make a difference.

Colorado goes to Oregon State on Saturday while the Ducks play host to Utah and just had a COVID-19 makeup game with No. 17 USC scheduled for Monday