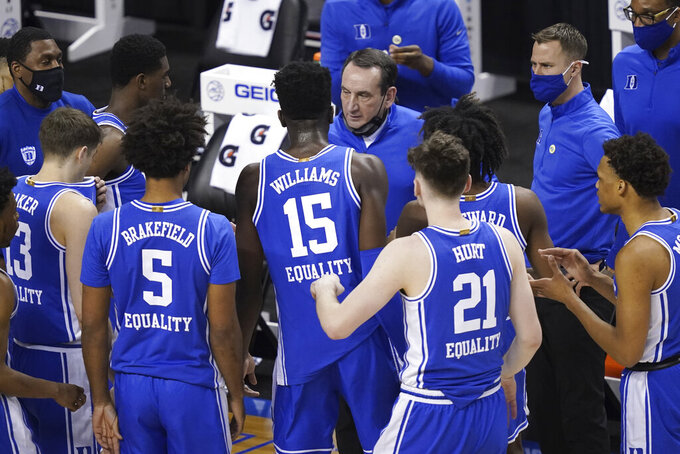 Duke head coach Mike Krzyzewski, top, talks to his team during the first half of an NCAA college basketball game against Louisville in the second round of the Atlantic Coast Conference tournament in Greensboro, N.C., Wednesday, March 10, 2021. Duke has pulled out of the Atlantic Coast Conference Tournament and ended its season after a positive coronavirus test and the resulting quarantining and contact tracing. The ACC announced that the Blue Devils’ quarterfinal game with Florida State scheduled for Thursday night has been canceled. (AP Photo/Gerry Broome)

Instead, the Blue Devils abruptly had to pull out of the tournament and end its season due to a positive COVID-19 test and the resulting quarantining and contact tracing.

The ACC announced that the Blue Devils' quarterfinal game against No. 15 Florida State for Thursday night has been canceled. And athletics director Kevin White said Duke's season is over, ending the Blue Devils' streak of 24 consecutive NCAA appearances that began in 1996.

In a statement, White said the positive test for someone within the program came after Wednesday’s win against Louisville, the Blue Devils’ second win in as many days in Greensboro. Before this, there had been no positive tests all season for a player or coach, he said.

“Since last March when the pandemic started, we have listened to our medical experts and always put safety at the forefront of any determinations regarding competition,” White said. “As a result, this will end our 2020-21 season. We wish every team still playing college basketball good health and the very best during the next few weeks.”

The Blue Devils (13-11, 9-9 ACC) failed to live up to their lofty standards, but coach Mike Krzyzewski said he loved this young team and was honored to coach it.

“We have not asked more of any team in our history, and they deserve enormous credit for handling everything like the outstanding young men they are,” Krzyzewski said in a statement. “I feel deeply for our players, who have done a terrific job all season in taking care of each other and the team.

“I am extremely proud of their collective attitudes and effort, which could not have been stronger.”

With Duke withdrawing, the Seminoles advanced to the ACC Tournament semifinals to play the North Carolina-Virginia Tech winner.

“I just think that preparing yourself for the unexpected is what we've been trying to do all year long," FSU coach Leonard Hamilton said. "It's unfortunate that we won't be able to play this game today. But we have to deal with it in a mature way and just be glad that no one's put at risk.”

“Our group is tested daily and on a path to have the requisite consecutive days of negative tests to be able to compete in the NCAA Tournament,” the school said.

With Duke's season over, this will mark the first time since 1976 that both the Blue Devils and another basketball blueblood — Kentucky — won't be in the NCAAs. The Wildcats lost their Southeastern Conference Tournament opener to Mississippi State on Thursday, ensuring that program's first losing season since 1988-89.

Duke hadn't missed the NCAA Tournament since the 1994-95 season when Krzyzewski stepped away from coaching following complications from back surgery. Assistant Pete Gaudet took over, with that team finishing 13-18 a year after Duke had played in the NCAA title game.

Before that, Krzyzewski had missed the tournament at Duke only in his first three seasons, when he went a combined 38-47 and faced growing pressure to turn things around as Triangle neighbors North Carolina (1982) and North Carolina State (1983) both won NCAA championships.

The first tournament bid came in 1984 and Duke went on to win 37 games while reaching an NCAA final two years later. That was the first in a remarkable run of seven Final Fours in nine years that included championships in 1991 and 1992. Krzyzewski's teams went on to claim three more titles in 2001, 2010 and 2015.

This year opened with some of the same expectations despite a young roster lacking the same NBA-ready talent of recent years with names like Zion Williamson and Jayson Tatum.

The Blue Devils started the year at No. 9 in the AP Top 25 but was unranked by mid-January for the first time in nearly five years. They lacked the typically rowdy homecourt edge in a fan-less Cameron Indoor Stadium and saw top freshman Jalen Johnson depart the team in February to prepare for the NBA draft.

After a lopsided loss at rival North Carolina, the Blue Devils knew they likely needed to win the ACC Tournament to extend the NCAA streak, even though no team has won five games in five days at the tournament. They opened with a lopsided win against Boston College then beat Louisville in Wednesday's quarterfinals after losing both regular-season meetings.

All along, Krzyzewski said focused more on developing a young group than past successes.

“And we as a program need to keep learning that and keep appreciating what it takes to takes to win. You don’t do that by not working hard or trying to get better. And that’s what we’re going to do.”