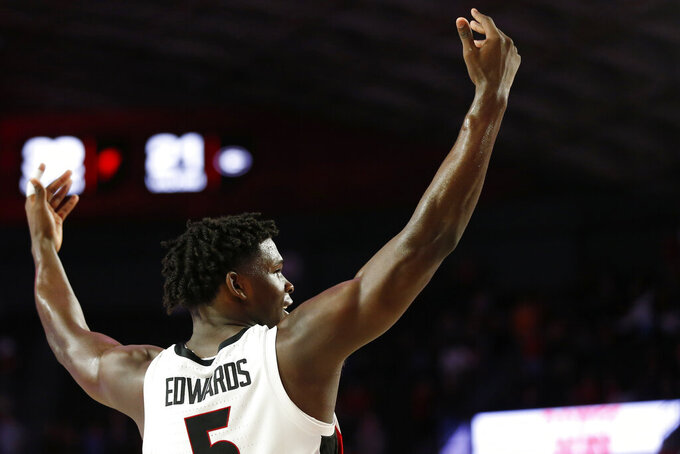 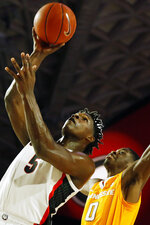 ATHENS, Ga. (AP) — Georgia's older players were motivated by what happened a year ago in Knoxville.

Anthony Edwards was ticked off about a more recent game.

Bouncing back from a disappointing performance last weekend, Edwards scored 20 of his 26 points in the first half, pushing Georgia to a big lead that carried the Bulldogs to an 80-63 victory over Tennessee on Wednesday night.

Edwards headed to the gym for a couple of late-night shooting sessions after an 82-60 loss at Auburn.

The extra work sure paid off.

“He's got a lot of pride," Georgia coach Tom Crean said. “He didn't like the way he played the other day.”

After a brutal three-game stretch against ranked teams, Georgia (11-5, 1-2 Southeastern Conference) romped past the Volunteers.

This one felt especially good after what happened last January in Knoxville.

Tennessee embarrassed the Bulldogs 96-50, sending Georgia to a dismal 2-16 mark in SEC play.

“That was my worst loss ever in my life," said junior Rayshaun Hammonds, who added 21 points. “No matter what, I wanted to get this win."

“I'm disappointed in about everything you can be disappointed in," coach Rick Barnes said. “I didn't think we had a competitive, fighting spirit at all."

With Edwards hitting from all over the court, Georgia built a 47-28 lead that essentially settled this one by halftime.

Late in the opening period, Edwards drove right down the lane for a two-handed dunk that brought the crowd at Stegeman Coliseum to its feet. He had them yelling even louder when a nifty between-the-legs, step-back move at the top of the key freed him up for a 3-pointer that made it 47-25.

Edwards grabbed at the "Georgia" written across the front of his jersey and waved his arms to rev up the student section.

“I love the crowd," Edwards said. “Every chance I get, I try to celebrate with them."

Hammonds connected on back-to-back 3s that suddenly pushed the lead into double figures at 32-19.

Barnes said his team must get better play from its guards, and really needs to step up its intensity at the defensive end.

“We just didn't put up the fight we normally do," he said.

Georgia's victory was marred by the loss of Sahvir Wheeler.

The freshman guard left the game midway through the second half with what appeared to be a right ankle injury.

It's not known how long Wheeler might be out.

Uros Plavsic played his first game for the Volunteers after being declared eligible by the NCAA.

He wasn’t much of a factor in 17 minutes, scoring five points and grabbing three rebounds.

But Barnes was encouraged by the performance - éspecially since it was the first game Plavsic has played in a year and a half. He was redshirted last season at Arizona State.

The 7-foot transfer was initially denied a waiver allowing him to play this season.

Tennessee: The Vols’ first six shots were from beyond the arc. They probably should have been working a little closer to the basket, finishing just 6 of 26 from 3-point range. ... Bowden picked up his third foul in the opening minute of the second half but was able to make it the rest of the way.

Georgia: Three freshmen — Edwards, Wheeler and Toumani Camara — started for the second game in a row. Camara had eights points, while Wheeler managed five before he went down. ... Edwards made 7 of 8 free throws after going 4 of 11 at the line in last weekend's loss to Auburn. ... The Bulldogs matched their win total from Crean's first season, when they went 11-21. ... Former Georgia quarterback Matthew Stafford was among the near-sellout crowd.

Georgia: Travels to Mississippi State on Saturday for the first of two straight SEC road games.