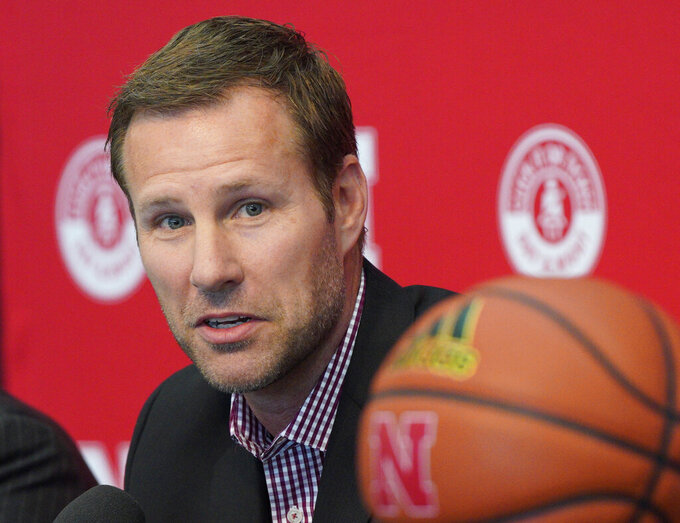 File- This April 2, 2019, file photo shows Fred Hoiberg being introduced as Nebraska's new NCAA college basketball head coach at a news conference in Lincoln, Neb. Nebraska fans will need to keep a roster handy when they watch Hoiberg’s first Cornhuskers team. Of the 16 players, 14 weren’t on the team in 2018-19. (AP Photo/Nati Harnik, File)

Only one of the two returning players has suited up for a game with the Cornhuskers. That's junior guard Thorir Thorbjarnarson, who accounted for 1.9% of the scoring last season.

As Hoiberg did during his successful 2010-15 run at Iowa State, he brought in a bevy of transfers he expects to fit his fast-paced, perimeter-based offense.

Expectations are low for the Huskers, who went 19-17 and played in the NIT in Tim Miles' final season. They are picked to finish 13th in the Big Ten for a second year in a row.

Dachon Burke, who sat out last season after transferring from Robert Morris, is the only returning player besides Thorbjarnarson. Burke was one of the top all-around players in his conference in 2017-18 and is expected to be a major contributor.

Four of the seven transfers are eligible. A fifth, Shamiel Stevenson, has appealed to the NCAA for immediate eligibility. He transferred from Nevada after a coaching change.

Graduate transfer Haanif Cheatham, who started his career at Marquette, has stepped into a leadership role after averaging 13.2 points and 4.8 rebounds in an injury-shortened season at Florida Gulf Coast. Another grad transfer, Matej Kavas, shot 46% on 3-pointers for Seattle.

Jervay Green was a celebrated recruit out of Western Nebraska Community College, where he was the No. 8-rated junior-college player in the nation. Cam Mack was the leading scorer at Salt Lake Community College last season and averaged 5.9 rebounds as the point guard.

The Huskers have seven freshmen, including four scholarship players.

Former Nebraska head coach Doc Sadler returns as an assistant after spending the last five seasons as head coach at Southern Mississippi. Sadler was 101-89 with three NIT appearances at Nebraska from 2006-12. Three of his teams led the Big 12 in scoring defense. He was director of operations at Kansas in 2012-13, joined Hoiberg's staff at Iowa State in 2013-14 and then took the Southern Miss job.

Hoiberg said he is a better coach after spending three-plus seasons at the helm of the Chicago Bulls. He said he is happy about his return to the college ranks after being a man without a team the second half of last season. He signed a seven-year contract valued at $25 million.

"I'd had enough of waking up and drinking coffee and watching game shows and doing puzzles," he said. "So I was ready to get back out here, and I'm really excited to be at Nebraska."

The Huskers went 4-0 during an August tour of Italy that served dual purposes.

"The best thing about that trip was the fact that our players had an opportunity to bond with each other and get to know each other," Hoiberg said. "X's and O's, putting in our system obviously is important, but the fact that our guys got to spend a lot of quality time was the biggest benefit."

Nebraska announced on Aug. 22 that it sold out its season tickets, the fifth time in seven years the allotment has been gone before the season. The Huskers' average attendance at Pinnacle Bank Arena was 15,341 per game last season, ranking first in the Big Ten and 10th nationally.

The Huskers open at home against UC Riverside on Nov. 5. They join Washington State, Old Dominion and George Mason in the Cayman Islands Classic the week of Thanksgiving, play at Georgia Tech in the Big Ten/ACC Challenge on Dec. 4 and meet in-state rival Creighton in Omaha on Dec. 7. The 20-game Big Ten schedule opens Dec. 13 at Indiana.