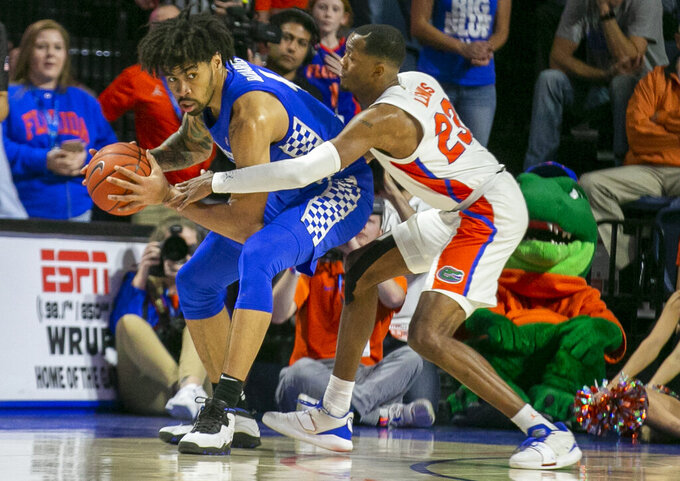 GAINESVILLE, Fla. (AP) — Florida guard Scottie Lewis, one of the Southeastern Conference's top defenders, is returning for his sophomore season.

Lewis made the announcement Monday via social media by saying “we have some unfinished business.”

"My dream of playing in the NBA is still a top priority, but my heart is in Gainesville!” he added. “I am excited for the journey that lies ahead. My story hasn’t even started, and trust me the best is yet to come!”

A McDonald's All-American in high school, the 6-foot-5 Lewis had been considered a one-and-done prospect when he arrived in Gainesville last summer. But his defensive prowess overshadowed his offensive skills for much of his first collegiate season.

The New Jersey native averaged 8.5 points and 3.6 rebounds to go along with a team-leading 36 blocks. He was second on the team with 36 steals.

He was at his best in SEC play, averaging 9.2 points and shooting 43.6% from 3-point range. He scored a career-high 19 points in the team's regular-season finale against Kentucky. The postseason was canceled amid the coronavirus pandemic.

Nembhard entered the NBA draft last year before withdrawing his name and returning for a second season. Johnson led Florida in scoring this season, averaging 14 points, and was second on the team with 7.1 rebounds. He also led the team with 38 steals.