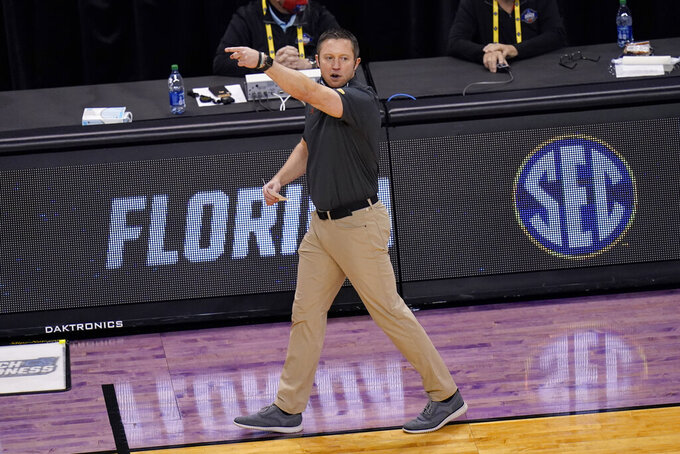 Florida head coach Mike White directs his team during the second half of a college basketball game against Oral Roberts in the second round of the NCAA tournament at Indiana Farmers Coliseum, Sunday, March 21, 2021 in Indianapolis. (AP Photo/AJ Mast) 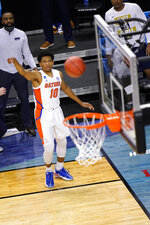 GAINESVILLE, Fla. (AP) — Florida guards Noah Locke and Ques Glover entered the transfer portal Thursday, one a surprise and the other expected. Losing them creates an even bigger backcourt hole for coach Mike White.

Locke started 51 of the team's last 52 games. He averaged 10.6 points and shot 40% from 3-point range this season. He's looking for a more prominent role after finishing as the team's fifth-leading scorer behind point guard Tre Mann, Keyontae Johnson, Colin Castleton and Tyree Appleby.

"I would like to thank my teammates, coaches, staff and Gator Nation for 3 years full of obstacles and experiences that have made me a better basketball player and man,” Locke posted on his Twitter page.

With Mann leaving school early for the NBA and Johnson's future uncertain following his unexplained collapse in early December, Locke likely would have been a key returner for coach Mike White. Instead, he will transfer — there should be no shortage of suitors for a 3-point specialist and team leader — and White might have a more significant rebuilding project on his hands than anticipated.

“As is the case every spring throughout power-conference basketball, there will be movement and the transfer portal will become as prominent as ever,” White told the school’s website. “We look forward to getting to the point where we find out who’s on our roster and getting back to work, finishing our schedule and hopefully more of a normal offseason.”

A three-year starter, Locke was at his best as a sophomore. He shot 48% from 3-point range in Southeastern Conference play, which was tied for the highest in league play since Vanderbilt's John Jenkins in 1996 (minimum 50 attempts).

Glover, meanwhile, didn't play in the SEC or NCAA tournaments. He scored 49 points in 20 games this season after finishing with 136 points in 31 games as a freshman in 2019-20.