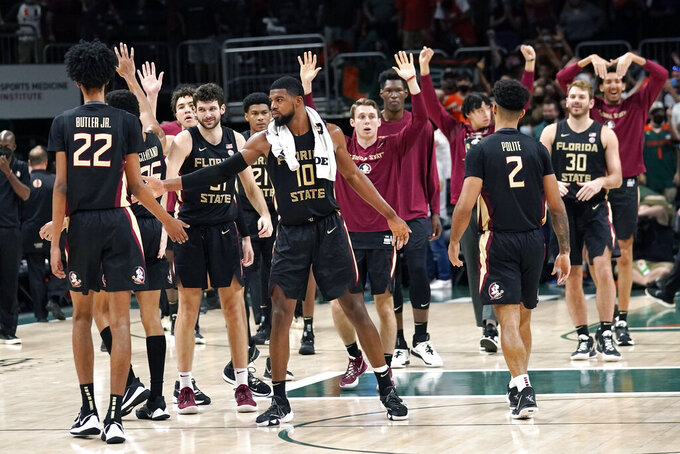 Miami's Isaiah Wong missed a contested fadeaway jumper at the buzzer. Miami used an 8-0 run in the last 2:20 to have a chance at the end.

In a near mirror-image contest, Florida State led 43-19 at halftime before the Hurricanes turned it around and outscored the Seminoles 41-18 in the second half.

Wong's basket with 15:53 before halftime brought Miami within 8-6. They wouldn't get closer until a Wong steal led to a fast-break lob to Sam Waardenburg to make it 61-60 with 39 seconds left.

Florida State used its final timeout with 5:39 as Miami's frantic push forced FSU coach Leonard Hamilton to exhaust them in attempt to break the Canes' rhythm. The 'Noles missed 13 of their last 20 shot attempts.

The Seminoles went to halftime with a 43-19 lead after shooting 56.3% (18 for 32) with 15-made shots inside the 3-point arc. Polite made all five of his shot attempts and scored 13 points. Five Florida State reserves contributed 15 points.

Miami did just the opposite, shooting 26.1% (6 for 23) and missed 11 of 12 from beyond the arc. The Hurricanes had one point off the bench before the break.

Wong finished with 22 points and now has scored in double figures in 18 straight games.

Florida State travels to Georgia Tech on Wednesday. Miami has a road contest against Virginia Tech, also on Wednesday.