Focused Xavier Johnson could be X-factor for No. 13 Hoosiers 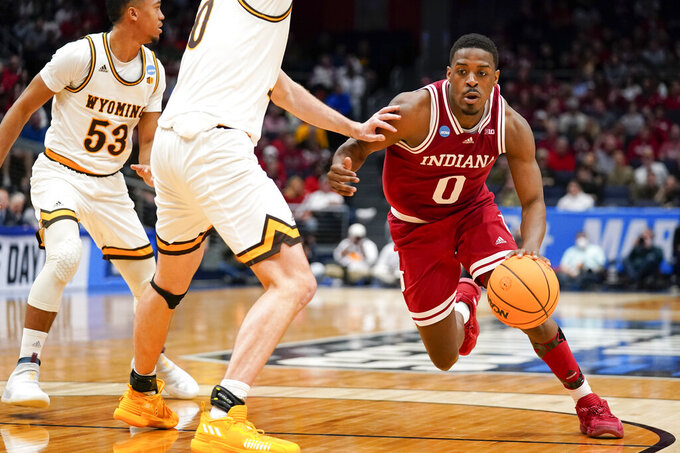 FILE - Indiana guard Xavier Johnson (0) drives past Wyoming's Xavier DuSell (53) during the second half of a First Four game in the NCAA men's college basketball tournament, Tuesday, March 15, 2022, in Dayton, Ohio. Xavier Johnson faced the stark reality his basketball days could be over when an April police chase ended in his arrest in a Bloomington parking lot. Indiana Hoosiers coach Mike Woodson gave him a second chance. (AP Photo/Jeff Dean, File)

BLOOMINGTON, Ind. (AP) — Xavier Johnson faced the stark reality his basketball days could be over when an April police chase ended in his arrest in a Bloomington parking lot.

Indiana Hoosiers coach Mike Woodson was willing to forgive his starting point guard if he agreed to some conditions. Johnson's car couldn't be on campus, he needed to follow all the team rules and he had to be fully committed to winning games.

Six months later, a revitalized and contrite Johnson finds himself preparing for a fifth college season, this time as the X-factor Indiana needs to increase its Assembly Hall banner collection.

“It just seemed like I hit a big-time wall,” Johnson said, explaining what happened that April night. “I thought my career was over, honestly. I’m mad at myself for doing something like that, but I mean I’m glad God gave me a second chance to come back and play what I love to do.”

He might not be with No. 13 Indiana had he been playing for Woodson's coach, Bob Knight, who was known as much for being a strict disciplinarian as he was for his volatile public outbursts.

But Woodson, whose coaching career spanned decades in the NBA, understood the challenges Johnson faced last season and took a different tack.

After transferring from Pittsburgh and winning the starting job, Johnson struggled with turnovers, decision-making and, at times, was a non-factor in the scoring column, too. The deaths of his uncle and grandfather took an emotional toll on the Virginia native and in February, Johnson was one of five players suspended by Woodson for “curfew violations.”

Johnson appeared to be turning his life around after a strong finishing run to help Indiana end a six-year NCAA Tournament drought, but then came the arrest.

According to the police report, Johnson was clocked going 90 mph in a 40 mph zone, did not stop when the officer turned on his siren and lights, disregarded a stop sign in the apartment complex and then attempted to switch seats with another student in the car. He was charged with resisting law enforcement with a vehicle and reckless driving, a felony.

“He doesn’t have a vehicle anymore, I took that away from him,” he said. “If that’s punishment, it’s punishment and I don’t mean that in a negative way. We’re just trying to do the things necessary to help us win basketball games, and I think he’s made a major step in that direction.”

Johnson's parents sided with Woodson and now Johnson finds himself thriving in a whole new world, amid expectations of winning a Big Ten title and chasing the school's sixth national title.

And Johnson could play a key role. In the final 10 games last season, he averaged 16.6 points, 6.6 assists and 4 rebounds as the Hoosiers played their way off the bubble and into the tourney.

Teammates say he's been a different player since returning to campus this summer.

“He’s definitely taken a big-time step in leadership and just kind of taking that role as being more vocal,” third-year guard Trey Galloway said. “I think he’s done a great job of being more vocal with the younger guys and kind of bringing them along.”

He came back for his fourth season after his NBA workouts were halted following a positive COVID-19 test. Nobody has more at stake this season than Jackson-Davis, who is trying to become the first Indiana player with 2,000 points and 1,000 rebounds.

And to ensure there are no distractions, he asked Woodson to institute a zero-tolerance drug policy.

“It’s really just to hold everyone accountable,” Jackson-Davis said. “There’s really nothing else to be said about it. I know our guys are going to do the right thing. When the season is going, we’re going to be locked in and ready to go because we have really big aspirations.”

That includes Johnson, who has never played on a team favored to win a conference crown.

But with the Woodson discussions complete, an August plea agreement ending his court case and a new season set to tip Nov. 7 against Morehead State, Johnson is ready to turn the page and make use of his second chance.

“He (Woodson) was just like, ‘If you want to play here, you either have no car or you can go somewhere else,’” Johnson said. “I really didn’t care about my car. I love to play basketball and that’s what I came here to do. That and get my education.”