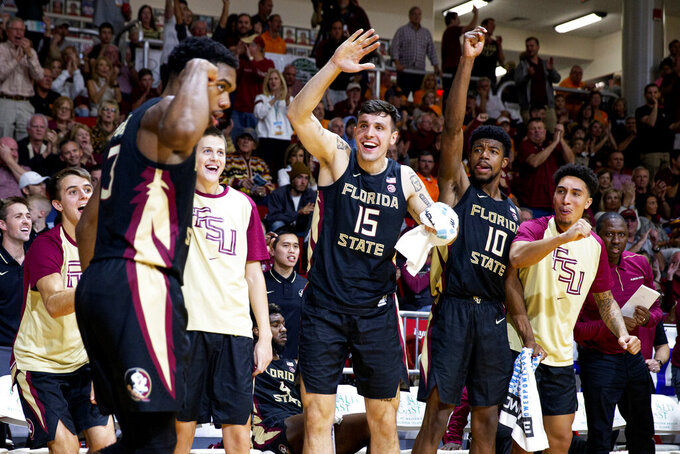 The bench erupts as Florida State guard Trent Forrest (3) flexes after hitting a three-point basket in the second half of an NCAA college basketball game against Tennessee at the Emerald Coast Classic in Niceville, Fla., Friday, Nov. 29, 2019. (AP Photo/Mark Wallheiser) 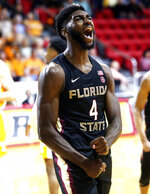 Devin Vassell scored 13 points, made a key steal and sank pair of free throws in the final minute, and Florida State upended No. 17 Tennessee 60-57 on Friday night in the Emerald Coast Classic.

Vassell led a balanced scoring attack for the Seminoles, while Lamonte Turner was the undisputed star for Tennessee. The point guard scored 20 points but twice had to leave the court with cramps.

Florida State (6-1) started hot, sprinting to a 14-2 lead. The Seminoles never trailed, although the Volunteers (5-1) twice closed the gap to three points in the final 3 minutes of what turned out to be a defense-dominated struggle.

“No doubt this had ... an NCAA, ACC tournament type of feel,” Florida State coach Leonard Hamilton said. “We knew we had to step it up in order to be successful against a team of this caliber. They kept coming back. They didn’t go away.”

Ten players scored for Florida State, but M.J. Walker was the only other Seminole in double figures with 10 points. Yves Pons added 13 for Tennessee. Jordan Bowden had 11 points and 10 rebounds.

Bowden hit a 3-pointer and Davonte Gaines made a pair of free throws in the final 2 minutes to narrow the margin to 57-54. Trent Forrest made one of two free-throw attempts with 32 seconds left to put Florida State ahead by four before Vassell stole the ball. He then made two free throws to ice the game.

Tennessee coach Rick Barnes said the Vols had to rely too much on Turner.

“We can’t play with one offensive player on the floor,” Barnes said. “When guys are open, they should shoot their shots.”

Nov. 10. FSU went into Friday’s game with the most votes of any unranked team in the AP poll, so defeating Tennessee could put the Seminoles into the Top 25. A victory in the tournament championship game would only solidify their case to be ranked.

Tennessee: Losing to a solid Florida State team may have slowed but perhaps not derailed the Vols’ upward momentum in the rankings. They could get back on track quickly because they are assured of facing a quality opponent in the tournament’s consolation game. Barnes remains three wins short of his 700th career victory. The loss also snapped Tennessee’s five-game winning streak against Atlantic Coast Conference opponents.

Tennessee and Florida State had played each other eight times before Friday’s game, but it was their first meeting in three decades. The Seminoles won the previous contest 101-90 on Jan. 15, 1989, in Tallahassee, snapping a seven-game Tennessee winning streak. The Vols now have a 5-4 advantage in the series.

Florida State’s bench has outscored its opponents’ reserves in each of the Seminoles’ last six games. The FSU reserves put up 22 points to two for the Vols. Hamilton’s rotations typically have included 10 or more players, which means Florida State usually is the fresher team at the end. The Seminoles came in with seven players averaging 20 minutes or more and four averaging between 10 and 19 minutes, but none with 30 minutes or more. Tennessee had three players averaging 30 minutes-plus but only two with 20 to 29 minutes and two more with 10 to 19 minutes.

Florida State faces the winner of Friday’s late game between No. 20 VCU and Purdue on Saturday in the championship game.

Tennessee plays the VCU-Purdue loser on Saturday in the consolation game.