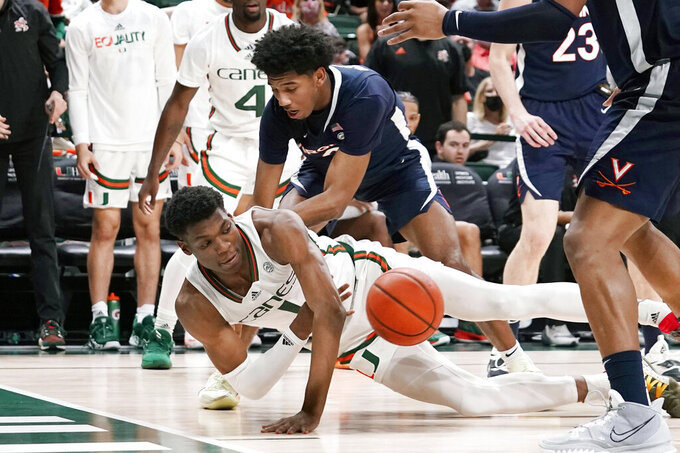 Miami forward Anthony Walker (1) passes the ball before it goes out of bounds as Virginia guard Reece Beekman (2) defends during the second half of an NCAA college basketball game, Saturday, Feb. 19, 2022, in Coral Gables, Fla. (AP Photo/Marta Lavandier) 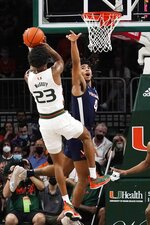 CORAL GABLES, Fla. (AP) — Jayden Gardner scored 15 of his 23 points in the second half, Kihei Clark scored 14 of his 17 after the break and Virginia stormed back to beat Miami 74-71 on Saturday.

Gardner, the reigning Atlantic Coast Conference player of the week, sank 9 of 14 shots and added seven rebounds for the Cavaliers (17-10, 11-6), who beat the Hurricanes (19-8, 11-5) for a sixth straight time. Sophomore Kadin Shedrick pitched in with 13 points and 13 rebounds off the bench for his third double-double of the season.

Miami sank six of its first seven shots to jump out to a 12-4 lead. Virginia battled back to grab a 28-25 lead on Shedrick's three-point play with 6:17 left before halftime. Isaiah Wong hit a jumper and added a three-point play as the Hurricanes closed out the half with a 13-2 run to take a 38-30 lead at intermission.

Kameron McGusty opened the second half with a layup to push the Hurricanes' lead to 10, but from there it was all Virginia. The Cavaliers pulled even at 42 on a Gardner jumper with 15:43 remaining. After a bucket by Miami's Jordan Miller, Clark buried two 3-pointers, Gardner scored twice in the paint and Virginia used a 10-0 run to lead 52-44 with 12:37 left. The Hurricanes got within two points three times — the last with 5:31 to go — but no closer.

Miami was coming off the program's first road win over Louisville, while Virginia failed to make a 3-pointer for the first time in 176 games in a loss to Virginia Tech.

The Hurricanes and North Carolina are tied for third in the conference. Virginia and Wake Forest sit a half-game back.

Miami travels to play Pittsburgh on Tuesday. Virginia returns home to play No. 9 Duke on Wednesday.