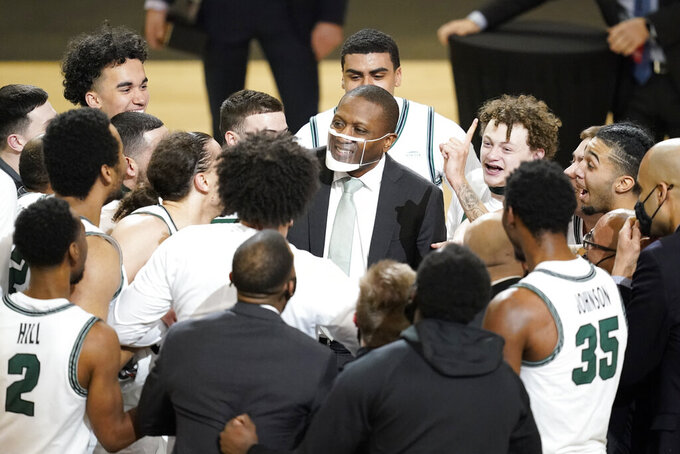 CLEVELAND (AP) — When his team made history for ineptitude in December, Cleveland State coach Dennis Gates looked into the eyes of his players and offered them hope.

In that moment, it's all he could do.

Ohio had just scored 40 straight points in a blowout over Cleveland State, a jaw-dropping, record-setting run as incomprehensible at the Division 1 level as a Sunday pickup game in the park.

And as Gates' phone began filling with text messages and voicemails of concern, he was straight with his squad.

“I told the guys,” Gates recalled. “'Look man, I love you guys, I’m not embarrassed by this, we’re gonna have a lesson and something greater is going to come out of it. The big picture is the lessons — you have to go through something.'”

The Vikings did. Three months later, they're in the NCAA Tournament.

For just the third time in school history, Cleveland State, a giant slayer in its two previous trips into March Madness, earned a tourney bid by winning the Horizon League title on Tuesday night.

The victory over Oakland continued a remarkable turnaround for a program that lost at least 21 games over five straight seasons before Gates, an assistant for eight years under Leonard Hamilton at Florida State, was brought in on July 26, 2019 — the last Division I coach hired before the 2019-20 season.

True to their nickname, these Vikings are tough and tenacious. They're also deep with nine players averaging more than 11 minutes. Their leading scorer, senior guard Torrey Patton, one of several transfers on the team, averages 14.9 points per game.

The passionate Gates, who signed a five-year deal with the school, has restored Cleveland State's pride on the court and in the classroom. When he arrived, the Vikings' program was in disarray with some players looking to leaver, others disillusioned.

“I guess it was the exact opposite of everything that’s going on right now,” senior forward Algevon Eichelberger said with a laugh over the phone from Indianapolis as the Vikings awaited their NCAA seeding. “Just overall, it was kind of dysfunctional.”

The 41-year-old Gates had heard all the reasons why he shouldn't take the Cleveland State job: tough place to recruit, downtown campus, commuter school, minimal fan interest in a city with three professional sports franchises.

Where others pointed out negatives, Gates saw opportunities. Still, he had to wonder what he was getting into when he called his first team meeting and only four players showed up.

Eichelberger, who transferred to Cleveland State in 2017, was one of them. It was then that he began hearing Gates speak about accountability and changing the Vikings' culture through hard work and a commitment to the three “Cs” — "the classroom, the court and the community.”

It's also when he learned about Gates' eight principles.

“Friendship, love, accountability, trust, discipline, unselfishness, enthusiasm and toughness,” Gates said, rattling off the tenets as if they were his children.

“Those are his babies,” Eichelberger said. “It’s a code we live by here at Cleveland State. It’s something we follow every day and if we do that, we’re going to be successful.”

Things didn't start too well for the Vikings, who dropped their first three games, including the 101-46 setback at Ohio on Dec. 6. Cleveland State missed 17 straight shots while allowing the Bobcats to score 35 straight points to open the second half.

On the three-hour-plus bus ride back to Cleveland from Athens, Ohio, Eichelberger sat with Gates and they talked about the team's potential and how the loss would make the Vikings better. Gates promised better days, banner risings and trophy presentations were ahead.

“He was totally right,” Eichelberger said.

Cleveland State felt right to Gates from the day he arrived.

Before accepting the job, he reached out to Hamilton and George Raveling, the longtime college coach who has become a mentor. They gave Gates a history lesson about the school, telling him about Hall of Famer John McLendon, who became the first Black coach at a predominately white institution when he was hired by Cleveland State in 1966.

Gates heard about McLendon's impact on the game, his mark on Black culture and diversifying coaching. He wanted to continue that tradition. This is where he wanted to be.

“There’s no way I wouldn’t think Cleveland State is an unbelievable place because I’m walking the same sidelines that John McLendon walked,” he said.

Next week, the Vikings will walk into the NCAA Tournament, where they've strutted before.

Gates has talked to his players about those earlier Vikings conquests.

“We respect our past and we stand on those shoulders of those dudes,” he said. “We know who they are and what they've been about. They have set the tone and the pace of what we need to make them proud of.”

Eichelberger believes Cleveland State can do it again.

“Most definitely,” he said. "There’s no reason why we shouldn’t be able to do something special with this team with the talent, cohesiveness and camaraderie, our scoring ability and how we play defense. There’s no way we shouldn’t surprise people.

"Not a surprise for us, but for other people and a lot of teams.”