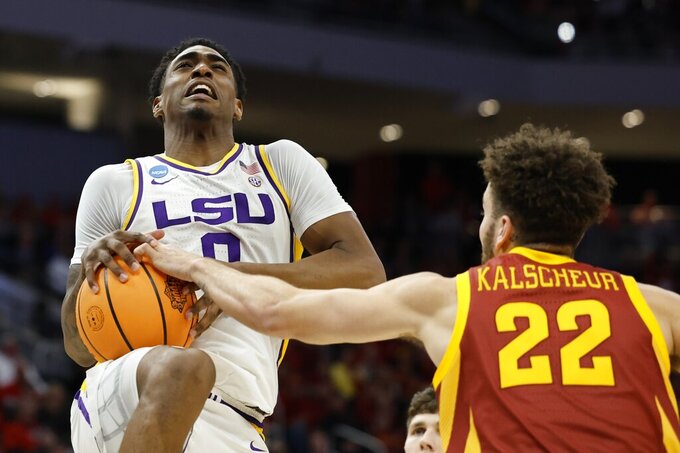 Brandon Murray has chosen to transfer to Georgetown, a potential boost for the once-storied program coming off a 6-25 season with no victories in the Big East.

The former LSU guard picked Georgetown over Tennessee and Illinois. The Hoyas announced Murray's decision Monday, and he tweeted, “DC WHAT UP !!”

“I’m happy to welcome Brandon Murray to the Hilltop," coach Patrick Ewing said. "He chose Georgetown, and we want to make him feel right at home. I am excited to see what he can do here and he is an important building block in our efforts to return this program back to national prominence.”

Murray was considered one of the top players in the NCAA transfer portal. He could have a role right away at Georgetown after leading scorer Aminu Mohammed decided to test the NBA draft waters.

A Baltimore native, Murray was named to the Southeastern Conference's all-freshman team. The 6-foot-5 guard started 32 games for LSU last season and averaged 10 points a game.

Several LSU players entered the transfer portal in the aftermath of the firing of coach Will Wade amid what the school called "serious” allegations of NCAA violations. Assistant Kevin Nickelberry took over as the interim replacement and coached the Tigers in the NCAA Tournament.

Nickelberry joined Georgetown as an assistant and recruiting coordinator on Ewing's staff in late March. Ewing at the time expressed confidence Nickelberry would be able to bring in top-level talent, and attracting Murray to join him from LSU is the first evidence of that.

Ewing is going into his sixth season at Georgetown, with the highlight of his tenure being a surprise run to the Big East Tournament title in 2021. The Hoyas' .194 winning percentage this past season, made possible by an 0-19 record in conference play, was the second worst in program history.