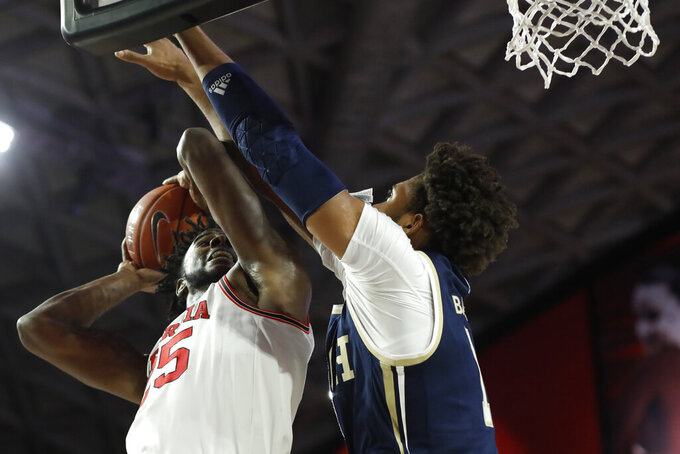 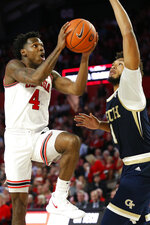 ATHENS, Ga. (AP) — Anthony Edwards was content to focus on other areas of his game when Rayshaun Hammonds was handling the bulk of Georgia’s scoring against Georgia Tech.

When Hammonds left the game with four fouls midway through the second half, however, Edwards immediately picked up his scoring.

Hammonds had 26 points, Edwards scored 16 of his 18 points in the second half and Georgia beat state rival Georgia Tech 82-78 on Wednesday night to maintain its recent hold on the series.

“My big brother here said ‘Take over, I'm out,’” Edwards said of Hammonds.

“In all honesty we're not even scratching the surface with him,” said coach Tom Crean of Edwards, a guard who was rated one of the nation’s top high school recruits and is projected as a possible high first-round pick in the 2020 NBA draft.

“He really, really wants to be a winner and that's the bottom line,” Crean said.

Michael Devoe led Georgia Tech (2-1) with a career-high 34 points and 10 rebounds to continue his high-scoring start to the season. Devoe had 22 points in each of the Yellow Jackets’ first two games.

“I was just being confident,” Devoe said. “... I was knocking down shots. I felt pretty good tonight.”

Georgia kept its lead in double figures most of the second half before weathering Devoe’s late spree of three 3-pointers.

Donnell Gresham, who had 13 points, sank five of six free throws for Georgia in the final 45 seconds to protect the lead.

Junior guard Jose Alvarado, Georgia Tech’s leader in scoring, assists and steals last season, had two points and two assists in his return after missing one game with an ankle injury. He sat out most of the second half as he tried to stay loose on an exercise cycle behind the Georgia Tech bench.

“He's our heart and soul so we started him, but he struggled out there,” said Georgia Tech coach Josh Pastner, adding Alvarado “just wasn't himself” and couldn’t keep up defensively.

Hammonds had 19 points in the first half, including back-to-back baskets to start an 11-0 run to give the Bulldogs a 33-25 lead.

Hammonds opened the second half with a three-point play, stretching Georgia’s lead to double figures for the first time at 38-27. Georgia expanded the advantage to 16 points, at 49-33, on Hammonds’ tip-in.

Georgia: Hammonds showed again he can be a veteran leader who can take pressure off Edwards. More scoring balance came from Tyree Crump, who sank three 3-pointers and had 11 points.

Pastner is 0-4 in the rivalry. “Nobody is punched more in the gut for not taking care of business in the state rivalry game than the coach, and that's me,” Pastner said, adding he is “most disappointed in myself we haven't been able to get it done.”

The five-game winning streak is Georgia’s longest in the state rivalry since seven straight from 1980-83, when the teams played more than once each season.

The Yellow Jackets made only 12 of 23 free throws. Banks was 0-for-4. Pastner said with such poor shooting “you're not going to win the game.”

Georgia: The Bulldogs will play Dayton on Monday in their opening game in the Maui Invitational.